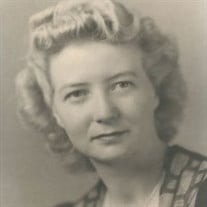 Delight Holt Penrod, 92, beloved wife, mother, grandmother, great-grandmother, great-great-grandmother and friend, died peacefully at home on the morning of October 10, 2014. Born in Provo, Utah to Verena Crandall and Cyrus B. Holt on September 18, 1922. Delight married her sweetheart, Paul S. Penrod on November 10, 1938. They enjoyed an amazing 72 years together before Paul was called home in 2011. Delight grew up on the family farm and learned to work hard early in life, where she learned to preserve fruits and vegetables and to cook and clean. She was often found teaching others one of these skills. She was famous for her fish fry, homemade bread and her pomegranate jelly, just to name a few. If you came to visit you never left without a loaf of bread, or if you were lucky, a jar of her pomegranate jelly. Delight was a member of the LDS church and served in various callings throughout the years. Later in her life she served in her ward by making cards for people. She loved to brighten people's lives with one of her homemade cards. Delight is survived by her son and daughter-in-law, Paul Steven and Pauline Young Penrod. Her grandchildren and their spouses, Paul Cyrus Penrod (Lorie), Shareen Golish (Rick), and William Clete Penrod (Jenny); brother, Val Douglas Holt (Sally); 15 great-grandchildren and 5 great-great-grandchildren. She was preceded in death by her parents; two siblings, Yvonne Holt Brockbank and Cyrus C. (Jack) Holt; her loving husband, Paul S. Penrod, and three infant sons. Funeral services will be held at 11:00 a.m., Wednesday, October 15, 2014 at the Grandview 1st Ward Chapel, 1555 North 1350 West, Provo, Utah. Friends may call at the Berg Mortuary of Provo, 185 East Center Street, Tuesday, October 14, from 6-8:00 p.m. and at the church, Wednesday from 9:30-10:45 a.m. prior to services. Interment will be in East Lawn Memorial Hills Cemetery. Condolences may be sent to the family through www.bergmortuary.com.

The family of Delight Holt Penrod created this Life Tributes page to make it easy to share your memories.

Send flowers to the Penrod family.