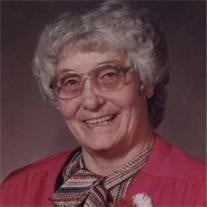 Delora Larsen Foster (Dee, Mom, Mommy, Mamma, Grandma, Aunt Dee, Heftus, Alice, Woman, Gernus, etc.) was born February 17, 1919 in her beloved Mammoth, Utah, a small mining community. She was the fourth child of Lawrence Larsen and Cortiniah Hansen. Her childhood was full of love, adventure, and mischief imaginable which continued even after she graduated from Tintic High School in 1937, and on through her later years. After a whirlwind courtship she married the love of her life Robert (Bob) Howard Foster on February 28, 1942 at an LDS Gold and Green Ball in Baton Rouge, Louisiana. They were separated for five of the next twenty years while Robert served abroad in the United States Air Force and Delora was left to support the war effort on the home front. While separated she often returned home to Utah to be with family and traveled to meet him on leave whenever possible. They lived the military life, moving to various states all over the country. During this time Delora kept busy raising four rambunctious boys often playing hide-and-seek in grocery stores, parking lots, and swift moving rivers. After twenty years of military service, they retired and moved to Athens, Georgia. Delora supported her husband and family while Robert studied at the University of Georgia and continued his studies in 1964 at Brigham Young University. Upon graduation they moved to Bowling Green, Kentucky where Delora studied music at Western Kentucky University while her husband served on the university faculty. Here she continued to render selfless service and heart-felt shenanigans. She graduated in 1975 having 'gone through the music department like no other student had done before or ever will.' After Robert retired from Western Kentucky University in 1976 they settled in Provo, Utah. It was here that Delora uniquely redefined what it is to be a wife, mother, grandma, devoted friend, and "partner in crime." A few of the things she especially enjoyed where spending cherished time playing with grandchildren, giving "Bob" his daily instructions (and completing the tasks together), phone time, taking a drive to Mammoth or Eureka, shopping at Deseret Industries, and pillaging as many yard sales as possible. She was the life of any party and her grandchildren adored her. She passed away on August 26, 2011 surrounded by her husband of almost 70 years, children, grandchildren, and great-grandchildren. She is preceded in death by her father (Lawrence Larsen), mother (Cortiniah Hansen), three brothers (Glen Larsen, Max Larsen, Melvin Larsen), one sister (Lillian Drage) and one son (Robert Clyde Foster). She is survived by her husband (Robert Foster), three sons Steven Foster (Peggy), Sam Foster (Maria), Dan Foster (Trena), 29 grandchildren and 33 great-grandchildren. Funeral services will be held at 11:00 a.m., Wednesday, August 31, 2011 at the Pioneer 1st Ward Chapel, 376 North 700 West, Provo. Friends may call at the Berg Mortuary of Provo, 185 East Center, Tuesday evening from 6 until 8 and at the church Wednesday from 9:30-10:45 a.m. prior to services. Interment, Mt. Pleasant City Cemetery, Mt. Pleasant at 3 p.m. In lieu of flowers please send donations to the missionary or education fund c/o Robert Foster or Steven Foster at 769 West 200 North, Provo, Utah 84601. Condolences may be sent to the family through www.bergmortuary.com.

The family of Delora Foster created this Life Tributes page to make it easy to share your memories.