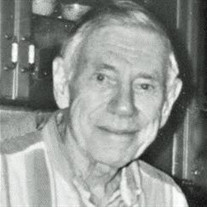 Delos Clark Jensen passed away Saturday, November 17, 2018 at Jamestown Assisted Living in Provo, Utah. He was born August 19, 1922 to Delos Bernard Jensen and Marjorie Gladys Clark Jensen, in Salt Lake City, Utah. After graduating from West High School, Del furthered his education at Utah State University, University of Utah, and Pennsylvania State University earning Bachelor's and Master's of Science degrees in meteorology. Delos served in the Army Air Force during World War II as a navigator on both B-17 and B-29 bombers. Post war, he completed his education and joined the USAF, where he served for 20 years. He married Alice Jane Barton of Beaver, Utah, on July 6, 1946 in Las Vegas, Nevada, and they were later sealed in the Salt Lake Temple. They added three children to the family while living in various Air Force postings around the world. After retiring from his military career, the family returned to Utah, settling in Salt Lake City to care for his aging parents. There he began a second career, earning a degree in secondary math education from the University of Utah, and becoming a calculus teacher in the Salt Lake City school district. He taught AP calculus at West High, and was named the Sterling Scholar Most Influential Teacher for the State of Utah. Delos is survived by his three children: William Barton (Connie Sargent) Jensen, Delos Clark (Lana Fife) Jensen Jr., and Jennifer Jane (Stanford) Olsen, as well as ten grandchildren, and six great-grandchildren. He was preceded in death by his wife, Jane; a grandson, Alex; and a brother, William. Funeral services will be held at 11:00 a.m., Saturday, December 1, 2018 at the Berg Drawing Room Chapel, 185 East Center Street, Provo, Utah. Friends may call from 10-10:45 a.m. prior to services. Interment, Salt Lake City Cemetery. Condolences may be expressed at www.bergmortuary.com.

The family of Delos Clark Jensen Sr. created this Life Tributes page to make it easy to share your memories.