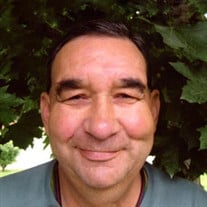 Dennis Ferguson, age 68, of Orem, Utah passed away peacefully of natural causes on June 11, 2020. He was preceded in death by his parents, Lois M. Ferguson and Ray B. Ferguson; three sisters, Joan Ferguson, Janet E. Wing, and JoAnn Ferguson; two brothers, Wayne B. Ferguson and Raymond A. Ferguson. Dennis was a member of the RAH organization for many years. He was a member of The Church of Jesus Christ of Latter-day Saints. Dennis enjoyed riding his bike, fishing, and putting jigsaw puzzles together. He liked being around people and going to the local café to have scrambled eggs and toast. Dennis faced many physical and mental challenges in his life, which he is now free from. He is survived by three sisters and one brother, Arleen (Butch) Stigers, Elaine (Ernest) Muller, Marilyn Harris, and Melvin (Pat) Ferguson. Graveside services will be held at 11:00 a.m., Tuesday, June 16, 2020 at the Orem City Cemetery, 1500 North 800 East, Orem, Utah. The family will receive friends at the Berg Orem Chapel, 500 North State Street, from 10-10:50 a.m. prior to services. Condolences may be expressed at www.bergmortuary.com.

The family of Dennis Ferguson created this Life Tributes page to make it easy to share your memories.