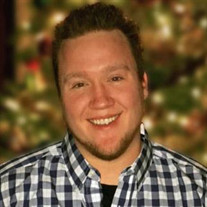 Devin Lloyd Meldrum, 29, of Provo, UT returned to his heavenly home unexpectedly on August 13, 2016. Devin was born April 30, 1987 in Mesa, AZ. As a child he attended Grandview Elementary in Provo, UT and participated in Boy Scouts of America and achieved the rank of Eagle Scout. While attending Provo High School, he was a member of the football team, drumline, and did fencing. He graduated in 2005 and went on to attend Utah Valley University in the field of computer technology. He followed that passion in a career working for Xactware Inc. in Lehi, UT. His family remembers him as being a peacemaker and always looking out for the underdog. He was a leader among his peers with a big heart and a selfless attitude. He was well known for his great sense of humor and his contagious laugh. He loved all things related to technology and found joy in excelling at computer games, reading Science Fiction and watching Star Wars and Star Trek. For the last few years of his life, Devin lived with a debilitating illness that kept him from enjoying simple every day activities, but even though he was in pain he showed great courage and determination to be a part of the lives of those he loved. His love for Kate and her daughters was always a priority, no matter how much he was suffering at the time. He was very blessed to have the opportunity to be a part-time father to them and they were truly the bright spot in his life. He is survived by his parents, Rodney Lee Meldrum and Tonya Lee Meldrum Provo, UT; siblings, Shawna Blaney (Jake), Cassondra Grover (Ashton), Logan Meldrum (SarahKay); fiancé, Kate Doty; and grandparents, Alvie Lloyd Holyoak and Deanne Nelson Holyoak of Moab, UT. He was preceded in death by his grandparents, Calvin Ray Meldrum and Carol Jean Tuttle Meldrum of Logan, UT and cousin, John Michael Luke of Nibley, UT. Devin also has many aunts, uncles and cousins who love him and will miss him dearly. Devin was loved by all who knew him and will be deeply missed until the day we are reunited again. Funeral services will be held at 11:00 a.m., Friday, August 19, 2016 at the Grandview 1st Ward Chapel, 1555 North 1350 West, Provo, Utah. Friends may call at the Berg Mortuary of Provo, 185 East Center Street, Thursday, August 18, from 6-8:00 p.m. and at the church Friday from 9:30-10:45 a.m. prior to services. Interment will be in the Spanish Fork City Cemetery. Condolences may be expressed at www.bergmortuary.com. Memorial fund contributions may be sent at https://www.generosity.com/memorial-fundraising/devin-lloyd-meldrum-memorial-fund

Devin Lloyd Meldrum, 29, of Provo, UT returned to his heavenly home unexpectedly on August 13, 2016. Devin was born April 30, 1987 in Mesa, AZ. As a child he attended Grandview Elementary in Provo, UT and participated in Boy Scouts of America... View Obituary & Service Information

The family of Devin Lloyd Meldrum created this Life Tributes page to make it easy to share your memories.

Devin Lloyd Meldrum, 29, of Provo, UT returned to his heavenly...

Send flowers to the Meldrum family.