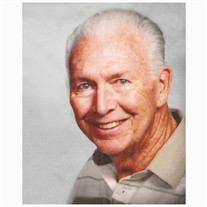 Donald Ray Adams, age 89, was peacefully reunited with his sweetheart Carol, on May 16, 2018 in St. George, UT. He was born March 16, 1929 in Pocatello, ID to George William Adams and Lettie Marie Bowler Adams. He had 1 brother and 4 sisters and was the last of his siblings to pass away. Don grew up in Los Angeles, CA. As a child, he loved to walk to the La Brea Tar Pits, Griffith Park, and the LA Zoo. He also particularly enjoyed spending time at the beach. After graduating from high school, Don went to work on his brother-in-law's farm in Provo, UT. There he met Carol Hull and they were married May 13, 1950. They were sealed in the Salt Lake Temple November 11, 1955. Don and Carol were married for 66 years. Don graduated from BYU in 1964 and remained a Cougar fan throughout his life. He worked at Geneva Steel as a chemist in the Nitrogen Lab earning the nickname "Speedy" for his quick and thorough work. He also taught math and science as a substitute teacher. After retiring from Geneva, Don and Carol accepted a call to serve a 12-month LDS mission in the Missouri, St Louis mission. Throughout his life one of his greatest joys was the time that he spent with his family. We often went camping at Yellowstone (one of his favorite places) and frequently traveled to various family vacation spots. Don was definitely bitten by the Adams family travel bug. He also loved a good cowboy movie, collecting coins, and was particularly fond of fishing. Don loved his God, his family, and his fellow man. He touched many hearts during his time on earth and will be remembered always through his legacy of service, example of unconditional love, and passion for service. Don was preceded in death by his wife, Carol Hull Adams. He is survived by their children: Christy Rees (St. George), Gary and Nancy Adams (Payson), Brenda Weidinger (Orem) and Diane and Bob Schneider (Indio, CA). They have 13 grandchildren, 54 great-grandchildren, and 4 great-great-grandchildren. Graveside services will be held at 11:00 a.m., Thursday, May 24, 2018 at the Orem City Cemetery, 1500 North 800 East, Orem, Utah. Friends may call at the Berg Mortuary of Orem, 500 North State Street, from 9:30-10:30 a.m. prior to services at the cemetery. Condolences may be expressed at www.bergmortuary.com.

Donald Ray Adams, age 89, was peacefully reunited with his sweetheart Carol, on May 16, 2018 in St. George, UT. He was born March 16, 1929 in Pocatello, ID to George William Adams and Lettie Marie Bowler Adams. He had 1 brother and 4 sisters... View Obituary & Service Information

The family of Donald Ray Adams created this Life Tributes page to make it easy to share your memories.

Donald Ray Adams, age 89, was peacefully reunited with his sweetheart...