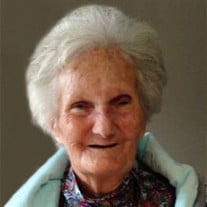 Donna Verniece Jolley Adams completed her life’s journey on June 7, 2014. She was born on August 23, 1926 in Provo, Utah, the daughter of Vernal and Amy Fairchild Jolley. Her early years were spent in Idaho before returning to Provo in 1942. Donna graduated from Provo High School in 1946 and attended UVSC. She married Ernst Schmidt. They were later divorced. On December 28, 1946 she married the love of her life George L. Adams. Their marriage was solemnized in the LDS Temple on September 30, 1948. Donna was a member of The Church of Jesus Christ of Latter-day Saints and she supported any religion that taught about the Savior Jesus Christ. She loved the Lord and was a faithful witness of Him and the truth of His word. Donna served in the primary, scouting, mutual, Relief Society, PTA, VFW, National Association of Letter Carriers Auxiliary, and National Association of Postal Supervisors. She worked for BYU Food Services, Stewart Grow, Max Andrews, JCPenney, and Provo City Bus Lines. Her greatest accomplishment was that of Homemaker. Donna was an amazing cook and a more amazing mother. Donna and husband, George, led a full and active life. They flew with Utah Flying Services and Civil Air Patrol. They were members of BPOE of Provo and various travel and boating clubs. They traveled extensively throughout the United States and Canada. They were avid golfers and boaters and as a family enjoyed Lake Powell. Donna was preceded in death by her parents, 3 brothers and 2 sisters. She is survived by 4 children: Donna Jean (Mike) Grove, Ogden; George Leonard (Kathy) Adams, Orem; Randall V (Sreyroth) Adams, Salt Lake City; Kathy Lyn (Ken) Greer, Springville; 1 sister, Fontella (Buck) Shephard of Washington state; 15 grandchildren; 48 great-grandchildren; 1 great-great-grandchild and many beloved nieces and nephews. The family extends gratitude to Darcy Harris and the staff at Bel Aire Senior Living Center in Orem and Janine Goldhardt, Heidi Baehler and the staff at First Choice Home Health and Hospice. Funeral services will be held at 11:00 a.m., Monday, June 16, 2014 at the Orchard 1st Ward Chapel, 670 East 800 North, Orem, Utah. Friends may call at the Berg Mortuary of Provo, 185 East Center Street, Sunday, June 15, from 6-8:00 p.m. and at the church Monday from 9:30-10:45 a.m. prior to services. Interment, Provo City Cemetery. Condolences may be sent online at www.bergmortuary.com.

Donna Verniece Jolley Adams completed her life&#8217;s journey on June 7, 2014. She was born on August 23, 1926 in Provo, Utah, the daughter of Vernal and Amy Fairchild Jolley. Her early years were spent in Idaho before returning to Provo... View Obituary & Service Information

The family of Donna Jolley Adams created this Life Tributes page to make it easy to share your memories.