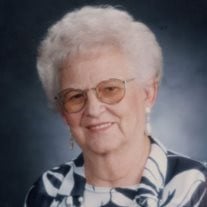 Donna Louise Jenkins Barton, 88, of Provo, Utah passed away peacefully on March 6, 2014 of complications from a fall. She was surrounded by her loving family. Donna, the daughter of William Michael and Jenerva Jones Jenkins, was born January 7, 1926 in Nephi, Utah. She had a wonderful childhood growing up with 10 brothers and sisters. She and her sisters always remained close and she missed them dearly after their passing. She was the last surviving member of her family. Donna met her eternal companion, Que D. Barton, at a café in Nephi where she was working. She graduated from Juab High School and one week later married Que in the Manti Temple on June 1, 1944. Que worked at Hill Air Force Base during World War II. Later he was offered a position at the Provo City Electrical Department which he accepted. They moved to Provo right after their marriage and have resided there ever since. Donna was active in the LDS church, serving in the Primary and Relief Society. She was a long time member of the Edgemont 7th Ward where she had many dear friends and neighbors. Her beautiful yard was enjoyed by many people as they drove by on Canyon Road. She had a real talent for growing flowers. She grew Canna Lilies from bulbs that she planted and dug up each year. She spent many hours doing genealogy and helping others with theirs. She compiled many scrapbooks of family histories and photos. She presented each of her children with a scrapbook of their life. She was an excellent quilt maker, completing many quilts that she shared with her children and grandchildren. She was a wonderful Mother and Grandmother and will be sorely missed by her family and friends. Donna is survived by six of her nine children. They are Annette (Wayne) Hoaldridge, Keith (Kathy) Barton, Kaylene Casper Palfreyman, Gary (Debbie) Barton, Kimber (Cindi) Barton and Melanie Molina, 26 grandchildren, 50 great-grandchildren, with 3 on the way, and 7 great-great-grandchildren. She is also survived by two sister-in-laws, June Bartholomew (whom lived at Cove Point with her) and Corinne Jenkins. She was preceded in death by her parents, 10 brothers and sisters, her loving husband Que, 3 sons: Baby Barton, Q LaMar, and Brent L., her grandson Sky and her son-in-laws Terry Casper and Dave Palfreyman. Funeral services will be held at 1:00 p.m., Tuesday, March 11, 2014 at the Edgemont 7th Ward Chapel, 555 East 3230 North, Provo, Utah. Friends may call at the Berg Mortuary of Provo, 185 East Center Street, Monday, March 10, from 6-8:00 p.m. and at the church Tuesday from 12-12:45 p.m. prior to services. Burial will follow at the Provo City Cemetery. Condolences may be sent online at www.bergmortuary.com. The family wishes to thank all those that cared for Donna at The Seville and Cove Point Assisted Living Centers. Also thanks to Envision Hospice for their service these past few months.

Donna Louise Jenkins Barton, 88, of Provo, Utah passed away peacefully on March 6, 2014 of complications from a fall. She was surrounded by her loving family. Donna, the daughter of William Michael and Jenerva Jones Jenkins, was born January... View Obituary & Service Information

The family of Donna Louise Jenkins Barton created this Life Tributes page to make it easy to share your memories.

Send flowers to the Barton family.