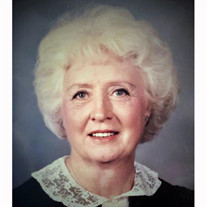 Doris Maybelle Stroud Warner, beloved mother, grandmother and great grandmother, joined her dear husband, Ted, when she passed on August 28, 2020 at the age of 91. Doris was the eldest of three children born to Mabel Robinson Stroud and Emmett R. Stroud, sharecroppers on a tobacco farm in Swansboro, North Carolina. Believing that an education would redirect the trajectory of her life, she put herself through East Carolina Teachers College, earning a degree in Home Economics. Upon graduation she worked as a dietician at Duke University Hospital. When a teaching position opened up in Southern Pines, North Carolina she took it. It was there she met her future husband, a soldier stationed nearby at Fort Bragg. She and Ted J Warner were married June 19, 1953 in the Salt Lake City Temple. They were together for 61 years until Ted’s death in July 2014. Doris earned a Master’s and Doctorate degree in Education from Brigham Young University – both while teaching full-time and raising three teenage daughters. She taught home economics for over 40 years, earning many awards for her outstanding work. Generations of students can thank her for teaching them how to combine a “basic mix,” to cook a pizza, and how to sew an A-line skirt. Sadly, her three daughters were not among those students. She pioneered Vocational Education at Provo High School and was proud to be the first teacher in the state of Utah to allow boys in her Foods classes. She often pulled all-nighters helping students finish their entries for the annual Make It With Wool contest. Together Ted and Doris traveled the world. They were directors of several BYU Semester Abroad programs to Madrid and London as well as tour guides through BYU Travel Study. They also enjoyed accompanying the Young Ambassadors on tour throughout the world. When both retired, they spent a year in China, teaching English and History through the China Teacher’s Program. They also served missions in Nauvoo, IL and at the Madrid Spain Temple. A convert to the Church, Doris loved the Gospel of Jesus Christ and found joy in serving others. Doris was generous with her time; if you asked her for help she would not just assist you she would give it her all. She was also generous with her home. Over the years, she took in numerous international students who needed a place to stay for a semester or two and in exchange she would ask them to teach her their language. Alas, while Doris was granted the gift of gab she was not granted the gift of tongues. Of course she spoke perfect English - with a Southern drawl. She loved working in her yard at the family home on Apple Avenue in Provo; her flowers were enjoyed by all who passed by. When she wanted to build a stone wall in the backyard, she taught herself masonry. Her finished project was christened, “The Great Wall of Doris.” Doris was a serious shopper, one skill her daughters would inherit. She loved a bargain and never left a sale empty handed. She could tell you where she purchased any item in her house. She could also quote how much she paid for it – always after a deep discount or even some haggling. Some of her happiest times were at the Rastro in Madrid, Spain or on Portobello Road in London. Her purchases in China had to be sent home in a shipping container. When her beloved “Tedder” passed away she moved to St. George, Utah where she served another mission for The Church of Jesus Christ of Latter-day Saints. She was an ordinance worker in the St. George Temple and she helped serve meals at the local homeless shelter. Doris is survived by three daughters, Kathryn “Katy” Warner Christiansen (Steve); Cecelia “Cissy” Warner (Dave Burnard); and Carolyn Warner Taylor (Tom); 8 grandchildren and 19 great grandchildren. A live stream of Doris Warner’s short memorial service will begin at 11:00 a.m. on Saturday, September 5th. Anyone can view the Event on Facebook, “Doris Warner Memorial.” She will be laid to rest at Provo City Cemetery next to her husband. Condolences may be expressed to the family at www.bergmortuary.com.

Doris Maybelle Stroud Warner, beloved mother, grandmother and great grandmother, joined her dear husband, Ted, when she passed on August 28, 2020 at the age of 91. Doris was the eldest of three children born to Mabel Robinson Stroud and Emmett... View Obituary & Service Information

The family of Doris Maybelle Stroud Warner created this Life Tributes page to make it easy to share your memories.

Send flowers to the Warner family.