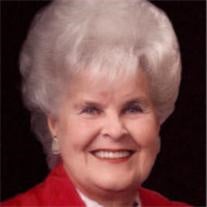 On November 5, 2011 our beautiful mom, after struggling valiantly with leaving her earthly family, stepped into the arms of her eternal one. Dorothy was born July 3, 1929 to Norma Louise and Howard (Huck) Dyer. She attended schools in Provo, UT where she was involved in choir, cheerleading and track. She met the love of her life, Burke J. Cloward, they were married on November 13, 1947. Their marriage was later solemnized in the Salt Lake Temple. Dorothy was blessed with seven children, 25 grandchildren, and 40 great-grandchildren, who have always been her main focus. Dorothy enjoyed bowling and golf. She was a member of a bridge club for over 60 years. Mom and Dad loved their Class of '47 friends, who they met with regularly. Mom was a member of the Elk Ridge 6th Ward. She loved serving in relief society and numerous other ward callings. Dorothy is survived by her children; Rod (Catherine) Cloward, Rick (Jill) Cloward, Carrie (Kim) Christensen, Debbie Roundy, Randy (Debbie) Cloward, and Gina Adamson; her grandchildren and great-grandchildren; and two sisters-in-law Sue Dyer and Melvina Dyer. She is preceded in death by her sweetheart, Burke J. Cloward; her baby girl Connie Lynn; two grandsons; Jason Cloward and Mark Cloward; great-grandson Kasen Stewart; her parents; two brothers Howard (Huck) Dyer and Robert (Bob) Dyer; and one sister Arline Dyer Johnson. The family wishes to thank Dr. Dennis Concaby, Dr. Dwight Williams, Max Staheli and the new friends she made with Alpine Hospice for the loving care they gave our mother. Funeral services will be held at 11:00 a.m., Thursday, November 10, 2011 in the Elk Ridge 6th Ward Chapel, 185 East Ridgeview Drive, Elk Ridge, Utah. Friends may call at Berg Mortuary, 185 East Center Street, Provo on Wednesday evening from 6 until 8 and at the church on Thursday morning from 9:30 until 10:45. Interment will be in the Provo City Cemetery. Condolences may be sent through www.bergmortuary.com.

On November 5, 2011 our beautiful mom, after struggling valiantly with leaving her earthly family, stepped into the arms of her eternal one. Dorothy was born July 3, 1929 to Norma Louise and Howard (Huck) Dyer. She attended schools in Provo,... View Obituary & Service Information

The family of Dorothy Dyer Cloward created this Life Tributes page to make it easy to share your memories.

On November 5, 2011 our beautiful mom, after struggling valiantly...