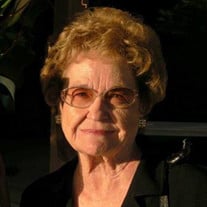 Dorothy Reid Jensen, age 87, passed away peacefully and on December 6, 2019 in her home in Provo, Utah. She was born on January 20, 1931 to Miriam and Robert L. Reid in Provo, Utah, where she grew up, married, and then had 2 children. She was preceded in death by her beloved sisters, Eloise (Grant Peterson) and Joyce (Raymond) Harris. Born of Utah pioneer stock by Robert and Miriam Reid, Dorothy’s childhood was blessed by the love and attention of a large loving family. She was a product of Provo City Schools graduating from Provo High School. She later attended Brigham Young University, University of Washington, Trinity University in San Antonio, Texas, and in her middle-age went back to college after her divorce from her first and only husband, Karl Reed Jensen (who passed at age 51), graduating with a Bachelor’s degree from California State University in Los Angeles in 1973. From a very early age, “ink” was in her blood. In Farrer Junior High School, she won the Intermountain Journalism Award for two straight years. At Provo High School, she worked at KOVO Provo Radio Station, the school paper, and garnered an Outstanding Journalism Award. She subsequently worked and received awards from The Daily Herald in Provo, Utah. Dorothy married her High School sweetheart, Karl Reed Jensen, at Provo’s St. Mary’s Episcopal Church. Karl served in the Air Force USAF and they moved to Lackland Air Base in San Antonio, where she served as a USAF Command research and technical editor. After the birth of her first son, Michael in 1956 (Salt Lake City, UT), the family then moved to Detroit, Michigan after Karl left his job at The Salt Lake Tribune for The Burroughs Corporation (a major American manufacturer of business equipment). At that time, Dorothy served as a writer for the Detroit Research Institute. Her second son, David, was born in 1959 (Detroit, MI). When David was born in Detroit and few years later, the family moved to Arlington, Virginia and thus began the “Wonder Bread” years of raising her two kids with all the love any mother could give. But, instead of pushing Little League or other sports, she (and Karl) made sure that their two children saw and participated in living history. Even went to Supreme Court trials because her Great Uncle George Alexander Sutherland was an English-born U.S. jurist and politician and an Associate Justice on the U.S. Supreme Court. In 1965, the family moved to the Highlands (a mostly Eichler home suburb just west of Belmont and San Mateo, California). Her oldest sister, Eloise, and her beloved husband, Grant Peterson, had lived there since 1957 raising their two children, Bob and Karen, and once again, she was closer to her Utah home. The additional bonus was being near her cousins, Fred and Marbra Scherer (and their family), living in San Francisco at the time. She felt reconnected. In 1968, the family moved to Pasadena, CA. She and Karl were divorced in 1973. Being a fiercely independent woman, she decided to go back to college and get her Bachelor’s degree. She then landed a job at the Los Angeles Department of Water and Power where she distinguished herself as an award-winning spokeswoman, writer, and public relations expert. She retired from the Los Angeles Department of Water and Power, sold the family house in Pasadena, and elected to return to her birthplace, Provo, Utah, to be closer to her sisters and be with her middle sister, Joyce, prior to her passing in 2004. Dorothy is survived by her sons, Michael Jensen, David and his wife, Kathleen Jensen; granddaughter, Kristen Jensen, and her beloved “Cat.” She is also survived by her extended family on both the Reid and Scherer; Sutherland side including her niece and nephews and their families, Kelly Harris and his wife, Denise, Kathy Farnsworth and her husband, Floyd, Karen Knowlton, Robert and Susan Peterson. Dorothy was a deeply independent, self-actualized, family loving devoted daughter, sister, wife, mother, aunt, grandmother, and friend. She loved poetry, politics, and Emily Dickinson. Most of all she loved the Wasatch Mountains, Stewart’s Flats, and Mount Timpanogos specifically. Her wish was to be cremated. Her memorial services will be held at 11:00 a.m., Saturday, January 11, 2020 at the Berg Drawing Room Chapel, 185 East Center Street, Provo, Utah. A reception will be held at 10:00 a.m. prior to services. Interment will be private at the Provo City Cemetery. In lieu of flowers, donations can be made to the Dorothy Reid Jensen Memorial Scholarship, that will be awarded to a young woman (to be determined) in journalism from Provo High School. Donation checks can be mailed to Dorothy Reid Jensen Memorial Scholarship c/o Suite 12, 101 East Green Street, Pasadena, CA 91105. Condolences may be expressed at www.bergmortuary.com.

Dorothy Reid Jensen, age 87, passed away peacefully and on December 6, 2019 in her home in Provo, Utah. She was born on January 20, 1931 to Miriam and Robert L. Reid in Provo, Utah, where she grew up, married, and then had 2 children. She was... View Obituary & Service Information

The family of Dorothy Reid Jensen created this Life Tributes page to make it easy to share your memories.

Dorothy Reid Jensen, age 87, passed away peacefully and on December...