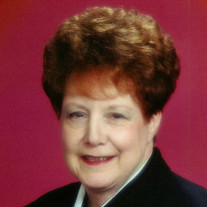 In the early morning hours of Thursday March 19, 2020 Heavenly Father and a host of others welcomed home an angel, our mother, grandmother, great-grandmother, and sister, JoAnn Abel. JoAnn was born on September 30, 1934 in Provo, Utah. She spent her entire 85 years in Provo, with only a short hiatus in Fallon, Nevada where she worked as a phone operator at the Naval Air Station in her early twenties. She was best known for red hair and a fiery personality. Early in her life she attended beauty school and became a licensed cosmetologist, a license she kept active until her passing. She worked for Cora Lee Johnson, “Aunt Co”, at Artistic Beauty Salon in Springville for a number of years. She met and married Kenneth Elton Abel on February 7, 1962. Ken grew up in American Fork and was well known for his high school athletics, everyone in AF knew him as “Elton”. In 1963 JoAnn opened her own shop, Carousel Beauty Salon, on University Ave in Provo. She moved her shop to her home to raise her children, Kenny & Kris. She actively did hair for 57 years. She always said she was going to write a book titled, “50 Years in the Hair House”, it would have been a best seller. The stories mom had from all those that sat in her chair for fifty years would have made for great reading and good laughs. JoAnn loved bowling and at one point in her life she bowled three times a week in leagues, and was the president of the Wednesday morning Provo women’s league for many years. She carried a 180-pin average for over twenty years. She loved her bowling family, many of whom she also did their hair. Mom’s number one priority was her family. Shortly after she and Ken were married, he was diagnosed with Type-1 diabetes. Their newlywed life was turned upside down. She insisted on becoming an expert in the hideous disease. She worked diligently to ensure Ken’s life was extended for as long as possible. That included ensuring his diet was perfect, that his medical care was the best, and that he took care of himself. In 1966 JoAnn and Ken welcomed their son Kenneth Clark Abel, “Kenny”. He was their miracle child as JoAnn had struggled with previous pregnancies including the loss of two full-term children. Kenny was given the middle name of Clark out of respect to JoAnn’s doctors, Richard “Dick” Clark and Craig Clark. Not quite two years into the life of their new son, Ken “Senior” experienced a heart attack. At the time JoAnn was told his survival rate was about 10%. She once again became the medical expert, demanding the best of doctors and the medical system. She worked diligently to ensure he would have the best care. In 1970 their lives were blessed with a beautiful daughter Kristine Abel, “Kris”. She was their second miracle child and they were so grateful to have her. JoAnn’s dedication to Ken kept him healthy for thirty more years. He passed away on June 22, 1998 at the young age of 61. Ken always thanked JoAnn for keeping him alive that long and loved her for all she sacrificed to make his life fulfilling. She was a trooper and has spent the last twenty-one years alone. She missed Ken every day and went above and beyond to keep his yard in pristine condition, as he would have. Kris and Kenny did everything they could to ensure mom kept her independence, which was always her request. Right up until the end she wanted to leave this earth life in her own bed, and she did thanks to Kris and Kenny. JoAnn was a member of The Church of Jesus Christ of Latter-day Saints; she and Ken were sealed for time and all eternity in the Salt Lake Temple in 1970. Her belief in the Gospel of Jesus Christ never waned and when Kenny left on a church mission in 1985, JoAnn took on a mission of her own. She set down her bad habits and was called to teach Relief Society, and within a year was called to be the Relief Society president of the ward she and Ken had spent their entire married life in. Mom’s experience as a less active member for so many years made her the perfect individual to love those that struggled with church activity. Women and their families accepted her as they had not accepted others in the past. Mom’s influence helped many as she loved them and served them. She and Ken spent a great deal of time in the temple; they loved attending and blessed the lives of so many. We will all miss mom and grandma: Ken and Evette and their children, Meg (McKay), Mitch, Austin, and Logan; Kris and Joey and their boys, Kolton (Allysa), Dylan, and Brady; great-grandchildren, Sophie, Juniper, Gracie, Edith, and Hank; and sister, Fae, whom she loved with all her heart. Mom celebrates in Heaven at this time with many friends and family, but most importantly with her eternal love, Ken, whom we know welcomed her home with long awaited open arms. Mom will be buried in a private graveside ceremony on Wednesday March 25, 2020 in the Provo Cemetery next to Ken. As the world struggles with these trying times, we want all of JoAnn’s friends and family members to know that later in the fall, Kris and Ken will be hosting a celebration of Mom and Dad in their beautiful yard in Provo. We will invite all to attend, if you would like an invitation please email Ken at [email protected] Condolences may be expressed at www.bergmortuary.com. In lieu of flowers, please make a donation to the American Red Cross and donate blood if you can. Mom required eight units last year and today it is more critical than ever. Do it for JoAnn!

In the early morning hours of Thursday March 19, 2020 Heavenly Father and a host of others welcomed home an angel, our mother, grandmother, great-grandmother, and sister, JoAnn Abel. JoAnn was born on September 30, 1934 in Provo, Utah. She spent... View Obituary & Service Information

The family of Dorothy "JoAnn" Abel created this Life Tributes page to make it easy to share your memories.

Send flowers to the Abel family.