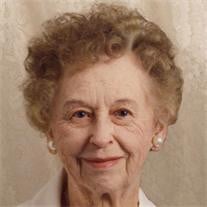 Dorothy Ann Leetham Butterworth, 98, wife of Edwin J. Butterworth, of Provo, died of old age on June 15, 2010. This beloved wife, mother, grandmother and friend will be greatly missed. She brightened the lives of all who knew her, with her encouragement, vivacious nature, wise counsel, good-natured humor, and generous assistance. Mrs. Butterworth lived a remarkably long and fruitful life. She was born January 4, 1912 in Benjamin, Utah, a daughter of James Golden Leetham and Josephine Shepherd Leetham. She received her education in Salt Lake City schools and attended Brigham Young University. She worked in the accounting departments of several Salt Lake City businesses during the Great Depression years. She was married to Edwin Butterworth on August 26, 1938 in the Salt Lake LDS Temple. They celebrated their 71st wedding anniversary in 2009. The family resided in Salt Lake City until 1949, when they moved to Provo after Mr. Butterworth was appointed to the BYU faculty. Mrs. Butterworth was active in church, civic, and cultural affairs. She was a member of the League of Women Voters, BYU Women, the Entre Nous Club, and the Forty-Niner Club. An avid reader, she was founder and coordinator of the 'Bookmark Literary Club'. She was a member of the LDS church, and for many years was a teacher in the Junior Sunday School, Primary, and Young Women organizations and served as a visiting teacher of the Relief Society. She is survived by a son, Dr. Byron E. Butterworth and his wife, Amy Johnson, of Raleigh, North Carolina; a daughter, Bonnie Barnes and her husband Thomas Barnes of Canton, Connecticut; a former daughter-in-law, Arlene Willes Butterworth Taylor, of Euless, Texas; and grandchildren Jeffrey Butterworth, Wendy Butterworth, Kimberly Cote, Chad Butterworth, Kelly Lafferty, Janna Lafferty, and Lindsey Marabella. She was preceded in death by her husband, Edwin J. Butterworth, who died only a few weeks ago; her brother, Jay Leetham; her sister, Leila Leetham Goodyear Sweeney; and former son-in-law, Dr. Terrence Lafferty. Funeral services will be held at 11:00 a.m., Saturday, June 19, 2010 at the Berg Drawing Room Chapel, 185 East Center, Provo. Friends may pay their respects at the mortuary Friday evening from 6 until 8 p.m., and Saturday one hour prior to services. Interment will be in the Provo City Cemetery. Condolences may be sent to the family through www.bergmortuary.com or [email protected]

Dorothy Ann Leetham Butterworth, 98, wife of Edwin J. Butterworth, of Provo, died of old age on June 15, 2010. This beloved wife, mother, grandmother and friend will be greatly missed. She brightened the lives of all who knew her, with her... View Obituary & Service Information

The family of Dorothy Leetham Butterworth created this Life Tributes page to make it easy to share your memories.