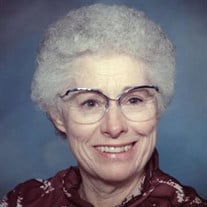 Dorothy Taylor Madsen passed away peacefully on January 21, 2015, at age 88. She was born to Karl Roe and Margaret Reese Taylor on October 15, 1926 in Provo, Utah. She was raised in Lakeview and attended the Lakeview School, the Spencer Elementary and Lincoln High School. On June 30, 1946, she married her sweetheart, Sheldon Anderson Madsen in the Salt Lake Temple. She was a member of The Church of Jesus Christ of Latter-day Saints. She was active in many callings, but her most treasured callings were with the primary. Together, Dorothy and Sheldon enjoyed their temple calling. They liked to travel and go boating at Quadra Island, B.C. From this union four children were born: Rosemary Smith (deceased), Michael Sheldon Madsen, Karl Lee Madsen and Shirlee Christiansen. She adored her 15 grandchildren and 22 great-grandchildren. Dorothy is survived by: Ogden (Michelle) Smith, Michael (Aleta) Madsen, Lee (Kathleen) Madsen and Shirlee (Bradley) Christiansen; her brothers-in-law and sisters-in-law: Jack Greenland, Lila Madsen, Donna and Art Paulson, and Ruth and Paul Reese. She was preceded in death by her husband, Sheldon; daughter, Rosemary; sister, Arlene Greenland; brother, Karl Lloyd Taylor; three grandchildren and one great-grandchild. We, as a family, would like to thank her nieces, nephews and neighbors. They took such good care of her and loved her very much. Funeral services will be held at 11:00 a.m., Monday, January 26, 2015 at the Lakeview Chapel, 1700 North Geneva Road, Provo, Utah. Friends may call at the Berg Mortuary of Provo, 185 East Center Street, Sunday, January 25 from 6-8:00 p.m. and at the church Monday from 9:30-10:45 a.m. prior to services. Interment will be in the Provo City Cemetery. Condolences may be sent online at www.bergmortuary.com.

Dorothy Taylor Madsen passed away peacefully on January 21, 2015, at age 88. She was born to Karl Roe and Margaret Reese Taylor on October 15, 1926 in Provo, Utah. She was raised in Lakeview and attended the Lakeview School, the Spencer Elementary... View Obituary & Service Information

The family of Dorothy Taylor Madsen created this Life Tributes page to make it easy to share your memories.