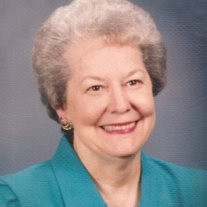 Dorothy Forbes Thomas died February 20, 2014 of symptoms related to Alzhiemers disease. She was born May 23, 1924, in Grafton, IL to Louis Leslie and Catherine Forbes. She received her early education in Grafton schools. The family moved to Spanish Fork, Utah, when her father was transferred to a new powder mill in Spanish Fork Canyon, Utah. The family lived in Spanish Fork and Dorothy attended Spanish Fork High School graduating in 1942. She was an accomplished pianist and participated in musical productions at the school. She had won contests in Illinois earlier in piano competition. She met her husband at Spanish Fork High School and after he entered the military service in 1943, she traveled to Camp Barkeley, Texas, where they were married on August 6, 1943. The marriage resulted in eight children, 5 boys and three girls and was to last some 70 plus years. After Wilson’s retirement, Dorothy and Wilson enjoyed traveling for some 15 years in their motor home and later to stay in touch with family members. She was a great cook of big dinners for many people and did so until she suffered a stroke that affected her memory and ability to do things she had done earlier. She was also to endure cancer and diabetes that had a major effect on her life. Dorothy and Wilson were active, participating members of St. Francis of Assisi Parish in Provo and Orem for over 73 years. Dorothy is survived by her husband, Wilson, and their eight children: Linda G. Henry, (Gary) Tacoma WA, Sue Ann Becker, (Michael) Renton WA, Joseph W. Thomas (Janette) Holladay UT, Thomas M. Thomas (Mariam) Orem, UT, Richard L. Thomas (Brenda), Las Vegas, NV, Anthony C. Thomas (Jane) Provo, UT, Teresa L. Jenson (Curt) West Valley City, UT, Steven Patrick Thomas (Malin) Saratoga Springs, UT. She is also survived by 24 grandchildren, 30 great-grandchildren and two great-great-grandchildren. She was predeceased by her parents and one granddaughter, Echo Thomas. The funeral mass will be held at 10:30 a.m., Tuesday, February 25, 2014 at St. Francis of Assisi Catholic Church, 65 East 500 North, Orem UT. Friends may call on Monday evening from 6:00 until 8:00 at the Berg Mortuary, 185 East Center Street, Provo. The Rosary Service will follow at 8:00 p.m. Friends may also call at the church on Tuesday morning from 9:45 until 10:25. Interment will be in the Provo City Cemetery immediately following the funeral services. Condolences may be sent online at www.bergmortuary.com.

Dorothy Forbes Thomas died February 20, 2014 of symptoms related to Alzhiemers disease. She was born May 23, 1924, in Grafton, IL to Louis Leslie and Catherine Forbes. She received her early education in Grafton schools. The family moved... View Obituary & Service Information

The family of Dorothy Forbes Thomas created this Life Tributes page to make it easy to share your memories.