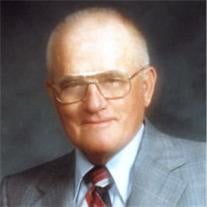 Douglas H. Johnson, 92, passed away at home in Provo, Utah, on December 24, 2010, from Parkinson’s disease. He was born December 16, 1918, in Taber, Alberta, Canada, to Henry E. and Christabel L. Savage Johnson. He was the oldest of eight children, three boys and five girls. He served in the Canadian Air Force as a radio operator during World War II. He married Helen M. Hiatt on April 11, 1944, before the war ended in Dartmouth, Nova Scotia, Canada. Their marriage was later solemnized in the Cardston, Alberta, LDS Temple. They were the parents of five children, one son (Brenton) and four daughters (Marianna, Anita, Claire, and Shelley). He became a radio operator and electrical engineer and worked for the Maritime Telegraph and Telephone Co. The family lived in Nova Scotia until 1966 when they moved to Provo, Utah. Doug attended BYU where he received his Doctoral Degree. Following graduation, he taught school at Utah Technical College (now UVU) where he was Director of the Math Lab until his retirement in December, 1980. His wife, Helen, died March 28, 1975, in Provo, Utah. Doug was an avid golfer and had four “Hole-in-One” awards. He was also an accomplished Ballroom Dancer and received the Silver, Bronze and Gold awards. While sharing his expertise as both a dance and golf instructor in the “Special Interest” program for adult singles in the LDS Church, he met, taught, and married his second wife, Louise Huntington Bates. They were married in the Provo LDS Temple on June 23, 1979. Louise is the parent of one son (Daryl) and two daughters (Karen and Kathy). Together they now have 27 grandchildren and 34 great-grandchildren. He spent much of his last thirty years since retirement from teaching doing genealogy and golfing until his health and deterioration from Parkinson’s would no longer permit him to do so. Preceding him in death were his parents, one brother, three sisters, his first wife, one daughter, and one great-granddaughter. He is survived by his loving wife, Louise, four children: Brenton (Luanne), Snowville; Marianna Sidwell, Heber; Anita (Jim) Mason, AZ; Claire (Jay) Kulawinski, Layton; step-son, Daryl Bates, MT; step-daughters, Karen (Larry) Francom, ID; Kathy (Orem); 27 grandchildren and 33 great-grandchildren. Funeral services will be held at 12:00 Noon, Thursday, December 30, 2010 at the Pleasant View 4th Ward Chapel, 2900 North 650 East (Timpview Drive), Provo, UT. Friends may call at the Berg Mortuary of Provo, 185 East Center Street, Wednesday evening from 6 until 8 and Thursday at the church from 10:30 until 11:45 a.m. prior to services. Interment, Orem City Cemetery, 1500 North 800 East, Orem, UT. Condolences may be emailed to the family at [email protected] The family wishes to thank LifePath Hospice Care for all of their services and care.

Douglas H. Johnson, 92, passed away at home in Provo, Utah, on December 24, 2010, from Parkinson’s disease. He was born December 16, 1918, in Taber, Alberta, Canada, to Henry E. and Christabel L. Savage Johnson. He was the oldest of eight children,... View Obituary & Service Information

The family of Douglas Johnson created this Life Tributes page to make it easy to share your memories.