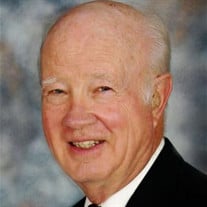 On June 20, 2016, our beloved husband, father and grandfather, Douglas Emron Jones, passed peacefully from this life surrounded by family at his home in Provo. Douglas was born in Long Beach, California on August 19, 1930, to Emron and Jennie Jones. He started learning the piano at age ten, and this hobby quickly developed into a passion. Motivated to practice several hours a day, he rapidly progressed and gave his first public concert at age 14. Performing a Tchaikovsky Concerto, he later said this was a highlight of his life. His love for classical piano never wavered, and his children have fond memories falling asleep to his beautiful playing. At age twenty, he enlisted in the Air Force during the Korean War. Color blindness prevented his dream of becoming a pilot, so he proudly served as an airborne radio operator instead. Upon returning, he and Donna, who grew up in the same ward, began dating and were married in the Mesa Temple on March 4, 1955. They spent 61 wonderful years together. Doug was a professor of physics at BYU for 30 years, focusing on space physics, while consulting for NASA’s JPL and Goddard divisions. Until his death, he was analyzing data received from his space instruments and showed continued passion and dedication for his research. He was an avid hiker and outdoorsman, spending many hours in the High Uintas and Southern Utah. Because of his love for nature, Doug was happily involved in scouting most of his life, serving as a Scout Master three times. Service in the LDS church fulfilled his great love for the Savior. Along with many other callings, this service included two full-time missions with his wife and ten years as a part-time family history missionary. He is survived by his wife Donna, seven daughters, one son, forty grandchildren and 22 great-grandchildren. Funeral services will be held at 12:00 noon, Saturday, June 25, 2016 at the Edgemont 6th Ward Chapel, 4056 North Timpview, Provo, Utah. Friends may call from 10:30-11:45 a.m. prior to services. Interment, East Lawn Memorial Hills. Condolences may be expressed to the family at www.bergmortuary.com.

On June 20, 2016, our beloved husband, father and grandfather, Douglas Emron Jones, passed peacefully from this life surrounded by family at his home in Provo. Douglas was born in Long Beach, California on August 19, 1930, to Emron and Jennie... View Obituary & Service Information

The family of Douglas Emron Jones created this Life Tributes page to make it easy to share your memories.