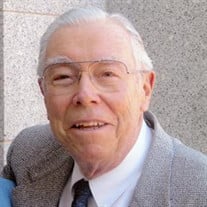 After an extraordinary life of more than 93 years, Douglas Hugh Parker passed away on Sunday, September, 22, 2019, anticipating the next great adventure of existence in partnership with his most valued friend and companion, his wife, Corene. After obtaining his bachelor’s degree from the University of Utah, Doug was accepted to medical school, but delayed his further education to enter the Navy during World War II. He served as a surgical nurse until his honorable discharge. Following his military service, Doug changed course and entered law school at the University of Utah where he graduated first in his class. Doug spent his life teaching, both formally and by example. Upon his law school graduation he was invited to teach at the University of Chicago Law School as a Bigelow Teaching Fellow. Accepting that invitation he became the first University of Utah Law School graduate to teach law at another law school. Following two years at the University of Chicago, Doug accepted a teaching appointment closer to home at the University of Colorado Law School where he taught for over 23 years. Doug then accepted a position at the new Brigham Young University J. Reuben Clark Law School where he taught for an additional 25 years. During his teaching years he also taught as a visiting professor at the University of Missouri Law School, University of Alabama Law School, University of New Mexico Law School, University of Arizona Law School, the University of Utah Law School, the Stetson Law School, at the Hebrew University in Jerusalem, at the Concordia National University Law School in Estonia, at Brigham Young University Hawaii. He also taught English to post graduate physicians and graduate degree nurses for a year in Jinan, China with Corene. Doug taught Federal Indian Law, Jewish Law, Roman Law and Legal Philosophy among other classes. While teaching at Brigham Young University Doug received the Karl G. Maeser Distinguished Teacher Award. While teaching in China he and Corene jointly received the Distinguished Provincial Teaching Award. Doug loved the outdoors. He and Corene owned two remote mountain cabins accessible in the winter only by cross country skis. Doug was a river runner. He rafted the Colorado River, Yampa River, Middle Fork of the Snake, and other rivers. He ran and completed 15 marathons, completing his last one when he was 69. Into his late 60’s he could climb to the top of the BYU field house on the climbing rope using only his hands and if pushed could do it twice. Doug was a believing, adherent member of The Church of Jesus Christ of Latter-day Saints. He served a mission for the Church in the Eastern States Mission, and later among numerous other Church callings served as an inspired Bishop. He believed that one could honorably have questions and entertain religious uncertainty and yet still be a person of deep faith. Concurrent with the questions he entertained were extraordinary and remarkable, confirming experiences. Doug was perceptive, thoughtful, wise, and open minded. He lived in a cerebral world, where he valued careful thought and scholarship. He had a kind, prescient, intuitive, sense about him and he cared deeply about others. He loved and valued his friends and considered them among his greatest blessings. He and Corene had Church friends, Jewish friends, agnostic friends, Muslim friends, and even friends who were Republicans. All were welcome in Doug and Corene’s home. For all of his varied interests, and for all that he accomplished, Doug considered his most rewarding, comforting, satisfying, sustaining, and important accomplishment to be his 66 year marriage to Corene. Doug and Corene were an inseparable partnership. That Doug’s first loyalty and commitment was to Corene was clearly evident in the selfless, continuous, conscientious care he provided at Corene’s side during her decline with Alzheimer’s. Seven children blessed their marriage, and by the time of Doug’s death, he and Corene were the progenitors of 100 grateful descendants. When our lives end, will we leave the world a better place? Douglas Parker did. Funeral services will be held at 11:00 a.m., Saturday, September 28, 2019 at the Riverwood Ward Chapel, 303 West 3700 North, Provo, Utah. Friends may visit with the family at the Berg Mortuary of Orem, 500 North State Street, Friday, September 27 from 6-8:00 p.m. and at the church Saturday from 9:30-10:45 a.m. prior to services. Interment, Salt Lake City Cemetery.

After an extraordinary life of more than 93 years, Douglas Hugh Parker passed away on Sunday, September, 22, 2019, anticipating the next great adventure of existence in partnership with his most valued friend and companion, his wife, Corene. After... View Obituary & Service Information

The family of Douglas Hugh Parker created this Life Tributes page to make it easy to share your memories.

After an extraordinary life of more than 93 years, Douglas Hugh...

Send flowers to the Parker family.