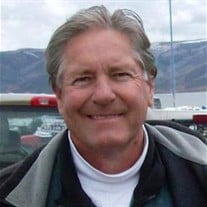 Douglas Omer Phillips, 72, of Orem, UT & St. George, UT, passed away July 3, 2015 in Provo, UT surrounded by his loving family after fighting a courageous battle with a long illness. He was the beloved husband of Rebecca Richards Phillips of Provo, UT. Their marriage was solemnized in the Salt Lake Temple, June 3, 1965. Doug was born at home, February 2, 1943 in Provo, UT, a son of the late Melvin and LaRue Peterson Phillips. He attended Orem High School, Utah Technical College, Weber State University and the Railroad Apprentice Program. Before he was married, he worked at the Phillips Nursing Home owned and operated by his mother. After 4 years of marriage, he worked for the Railroad and remained there until he purchased Madsen Boat Camp on Strawberry Reservoir in 1977, and later built and operated Strawberry Bay Marina & Lodge in 1983. He was also a very talented tile setter, plasterer, and very skilled with cement. He loved to travel and visited 46 of the 50 states, all by car. Doug is survived by his wife, Rebecca; sons, Gregory Omer (Susan Stowe) Phillips of St. George, UT, Paul Douglas (Laura Jensen) Phillips of Heber, UT, and Jon Henry (Tracy Lisonbee) Phillips of Heber, UT; daughters, Heather Ann (Matthew) Erwin of Provo, UT and Natalie Phillips Bulkley of Provo, UT; sisters, Anita Phillips Williams and Linda Phillips Clark; brother, Gordon Tim Phillips; 17 grandchildren and one great-grandson. He was preceded in death by his brother, Richard Melvin Phillips. He was an active member of the LDS faith and served in numerous callings including: Elders Quorum Presidencies, Young Men's President, and Scouts. Doug loved people and enjoyed sparking his enthusiasm for fishing and hunting with everyone he met. He had a generous and gentle heart filled with courage, strength and unconditional love which he freely gave to all he knew, but especially to his family. Funeral services will be held at 11:00 a.m., Tuesday, July 7, 2015 at the Canyon View 7th Ward Chapel, 575 East 800 North, Orem, Utah. Friends may call at the Berg Mortuary of Provo, 185 East Center Street, Monday from 6-8:00 p.m. and at the church Tuesday, from 10-10:45 a.m. prior to services. Interment will be held at East Lawn Memorial Hills, Provo, Utah. Condolences may be extended to the family at www.bergmortuary.com.

Douglas Omer Phillips, 72, of Orem, UT & St. George, UT, passed away July 3, 2015 in Provo, UT surrounded by his loving family after fighting a courageous battle with a long illness. He was the beloved husband of Rebecca Richards Phillips of... View Obituary & Service Information

The family of Douglas Omer Phillips created this Life Tributes page to make it easy to share your memories.