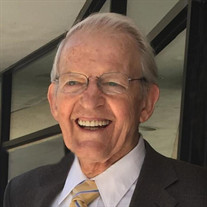 Duane Hiatt lived his life for riches. Not the riches of this earth, but those of eternity. His full life consisted of honing his talents, serving others and blessing his large posterity. Duane was born in Payson, Utah to Ferron and Gladys Hiatt, where he played basketball and football for the Lions and served as student body president. He went on to serve a mission in the Tongan Islands and returned to Brigham Young University on scholarship to play basketball. While at BYU, he formed the popular singing group with Dick Davis and Denis Sorenson named The Three D’s. For sixteen years they entertained audiences with their unique style of music and humor throughout the United States and Canada, as well as a USO tour to Asia. During this time he met and married Diane Robertson of Spanish Fork. They went on to have fifteen children, ten boys and five girls. After the days of The Three D’s, Duane was a radio announcer, then Director of Communications for the Division of Continuing Education at Brigham Young University. He was a writer of “The Spoken Word” for broadcasts of the Mormon Tabernacle Choir, author of the book Overcoming Personal Loss and composer of the Primary song “Follow the Prophet.” He is listed in Who’s Who in American Writers and Poets, Who’s Who in Entertainment, Who’s Who in the West, and Personalities of the West and Midwest. He was president of America’s Freedom Festival at Provo, Utah, and under his direction the city received the George Washington Medal of Honor from the Freedoms Foundation at Valley Forge. Duane’s wife, Diane, passed away after a battle with cancer in 1987. He counted himself twice blessed when he met and married Sharon Johnson of Burley, Idaho, who not only consented to marry him and accompany him as he continued to perform and sing, but also to be mother and grandmother to 15 children, 73 grandchildren, and 7 great-grandchildren. In The Church of Jesus Christ of Latter-day Saints, he served twice as a bishop and twice as a high councilor. Duane and Sharon went on to serve a mission to the Caribbean Islands. Duane Hiatt passed away on Sunday afternoon, May 24, 2020. Next June 16th, he would have been 83 years old. He is survived by his brothers, Gordon (Sharilyn) and Roger (Merrilee) and his sisters, Diane (Elton) and Jeanie (Richard). He was preceded in death by his brother, Richard (Yolanda) and grandson, Dylan. Private family funeral services will be held at 11:00 a.m., Saturday, May 30, 2020 in the Edgemont 10th Ward Chapel, 345 East 4525 North, Provo, Utah. Friends may call at the church on Friday, May 29, from 6-8:00 p.m. Interment, Eastlawn Memorial Hills. To view the live webcast of the service, visit https://webcast.churchofjesuschrist.org/view/35436 Condolences may be expressed at www.bergmortuary.com.

Duane Hiatt lived his life for riches. Not the riches of this earth, but those of eternity. His full life consisted of honing his talents, serving others and blessing his large posterity. Duane was born in Payson, Utah to Ferron and Gladys... View Obituary & Service Information

The family of Duane Evan Hiatt created this Life Tributes page to make it easy to share your memories.

Duane Hiatt lived his life for riches. Not the riches of this...

Send flowers to the Hiatt family.