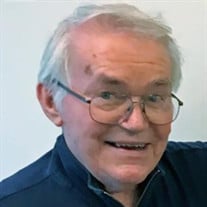 Duane was born March 24, 1938 in Fargo, North Dakota, and passed away November 7, 2021 in his home in Spanish Fork, Utah. He was adopted after a short time in the foster care system by Gilbert and Mildred Stoller of Custer, South Dakota. He was raised as an only child and grew up in Custer near extended family. Some of his favorite companions were his cousins and his horse Honey and dog Tippy—who he taught to do some pretty amazing tricks. He had a talent for music and learned to play the steel guitar. Duane was playing professionally by the age of 13 and enjoyed the lifelong friendships with the many people he played with. He continued playing off and on until just a few years ago. Duane married his high school sweetheart Karen Reese in January of 1958 and they had four children: Gloria, Jeff, Angie, and Diana. He graduated from the Black Hills State College in 1964 and worked in Arvada, Wyoming as a teacher until 1967 when he moved his family to Laramie, Wyoming to attend the University of Wyoming for a Master’s Degree. Duane became interested in the computer industry and worked as an analyst for the next 30 years, retiring in 1997. To keep himself busy he started doing taxes for H&R Block, which he was scheduled to do for the 2022 tax season. Nearly 11 years ago, Duane found his biological mother and 6 siblings: Judy, Duane, JoAnn, Darlene, Gary, and Diana. His mother passed away prior to their first meeting, but Duane really enjoyed the time he spent getting to know his extended family at their summertime reunions. After a lengthy (37 year) investigation of The Church of Jesus Christ of Latter-day Saints, he was baptized in May of 2017, and sealed to Karen in the Payson Utah Temple in May of 2018. Duane loved life and tried to make a positive difference in everything he did. He believed in learning and improving himself, and he worked on that principle his whole life. He had many friends and made them easily as he took the time to make others feel that they mattered. He is loved and will be missed very much as he made life more enjoyable. He is preceded in death by his parents Gilbert and Mildred Stoller, his biological mother Val Odegard Rabbe, and his brother Duane Rabbe. Duane is survived by his wife Karen, his children: Gloria (Hal) Schofield, Jeff (Erin) Stoller, Angie (Ted) Godfrey, Diana (Steve) Phillips, 17 grandchildren and 15 great-grandchildren, his siblings: Judy McGinnis (Frank), JoAnn Sexton, Darlene Weflen, Gary Rabbe, and Diana (Ray) Rabbe. There will be a memorial service for Duane at 11:00 AM, Saturday, November 20, 2021 at the River Bottoms Chapel, 3477 E. River Bottoms Rd, Spanish Fork, Utah. In lieu of flowers, please consider donating to a favorite charity. Condolences may be expressed at www.bergmortuary.com.

Duane was born March 24, 1938 in Fargo, North Dakota, and passed away November 7, 2021 in his home in Spanish Fork, Utah. He was adopted after a short time in the foster care system by Gilbert and Mildred Stoller of Custer, South Dakota. He... View Obituary & Service Information

The family of Duane Alan Stoller created this Life Tributes page to make it easy to share your memories.

Send flowers to the Stoller family.