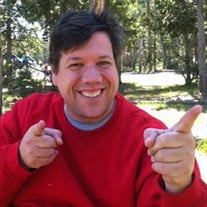 On Tuesday, November 21, 2018 Duncan Neil Lillico passed away unexpectedly from a pulmonary embolism. He leaves behind his wife, Kari Connor-Lillico; his three children, Aurora (Rory) Helen, William Neil Duncan (Liam), and Autumn Belle Lillico; and his father, Neil Bruce Lillico, married to Michelle Delorme. Duncan was born in Ottawa, Ontario, Canada on July 30, 1974. He attended several elementary and high schools in Ottawa as well as Algonquin College. He started working at the Mayflower Restaurant in 1990 and remained there until 1997. While working at the restaurant he met Kari Connor, the love of his life, and they were married June 21, 1998. Between 1997 and 2002 Duncan also spent some time in the high tech field as a programmer. In 2002 he moved to Whitehorse, Yukon Territory, Canada and worked in the food service industry until he purchased a video arcade business, which he ran for several years. He found a new interest and worked as a project manager developing condominiums in Whitehorse. His ability to quickly learn the requirements of a project manager, with no formal training, resulted in a job offer in Provo, Utah. Duncan, Kari and Rory (2004), moved to Provo, in 2006. Liam and Autumn were born in Provo in 2006 and 2008 respectively. The 12 years he spent in Provo have been most interesting, and Duncan not only worked for Summerset Corporation, but he started his own property development company. Duncan was quite an entrepreneur and had many diverse business interests. Among them were his fireworks sales at various times during the year and his “urban mining” venture (https://www.forbes.com/sites/trevorbutterworth/2012/07/17/welcome-to-the-age-of-urban-mining/#5d9d214f33d5). Duncan also enjoyed purchasing and reselling surplus items from various government and national park entities. Duncan’s primary hobby was bargain hunting. This included attending garage sales every Saturday that he could, visiting thrift shops, and checking Walmart and Target on an almost daily basis looking for clearance items. He was also very involved in the community and spent many hours assisting others via such programs as: Meals on Wheels, The Food and Care Coalition, and 100 Men Who Care. He always enjoyed helping others be they family, friends, neighbors, local schools, or anyone who needed encouragement and support. What he loved most of all was his family and he dedicated his time to creating memories and a deep bond that his wife and children will carry with them forever. Funeral Services will be held at 2 p.m., Wednesday, November 28, 2018 at the Berg Drawing Room Chapel, 185 East Center Street, Provo, Utah. Friends may call from 12:30-2 p.m. prior to services. Condolences may be expressed at www.bergmortuary.com.

The family of Duncan Neil Lillico created this Life Tributes page to make it easy to share your memories.

Send flowers to the Lillico family.