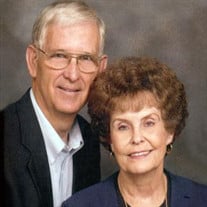 E. Alan Pinkston, 82, husband, father, grandfather, mentor, and friend, passed away quietly and peacefully on October 28, 2017, from pancreatic cancer. Alan was born in Los Angeles, California, on April 16, 1935, to Everett Myron Pinkston and Marion Bell Norberg. He was their second child and first boy. In his mother’s history, she said, “Alan introduced me to the wonderful and nerve-wracking world of boys.” Shortly after Alan was born, the family moved to the Windsor Hills area of Los Angeles--a great place for an adventurous boy to grow up. Alan grew up and channeled his boyish energy into becoming a very hard worker. He worked at F.W. Woolworth Five and Dime (for $0.50/hour) and drove truck for Royal Crown Cola Company. Alan graduated from Dorsey High in 1953. He attended BYU, then received a call to serve a mission in Sweden where he served honorably--and spent the rest of his life trying to teach us Swedish. Alan met Patricia Thomsen in Primary when they were five years old, and they have been inseparable ever since! They married on October 30, 1958, in the Los Angeles Temple. Patie was the love of his life and the center of his world. Alan earned his master’s degree from Cal State L.A., and taught elementary school in the Los Angeles Unified School District for 35 years. Alan was a master teacher, coming up with creative ways to instill a love of learning in his students. Alan and Patie moved to La Crescenta, California, in 1974 where they raised their two boys (Paul and David) for 25 years. He served as a counselor in the bishopric, on the high council, and as the bishop of the Verdugo Hills 1st Ward. He served faithfully and always magnified his callings. They loved their La Crescenta neighbors and friends. In 1999, after retiring from teaching (and no longer able to bear living in a different state than their grandchildren), they moved to Provo and into the wonderful Grandview 10th Ward. Alan loved woodworking and was incredibly skilled at making things, repairing things, and just being super handy. He helped with building everything, from Pinewood Derby cars and Eagle projects to toys and furniture for his family, neighbors and friends. We would like to acknowledge and thank Dr. Gary Garner and his team for their attention, kindness and care while Dad was in the hospital. Alan is survived by his wife, Patricia Pinkston; siblings, Joanne Chamberlain, Bryon Pinkston and James Pinkston; sons, Paul and David (Katherine); grandchildren, Sydney (Parker), Allyson (Dallin), Kyle, Scott and Brigham; and great-grandchildren, Jack, Holly and McKay (coming soon). We will miss Alan, but we are grateful that he is with his parents, his brother David, and his grandson, Chad. Funeral services will be held on Monday, November 6, 2017, at 11:00 a.m. in the Grandview Stake Center, 1600 N. 1880 W., Provo, Utah. Friends may call at the church on Sunday, November 5, from 6-8:00 p.m. and Monday from 9:30-10:45 a.m., prior to services. Interment, Orem City Cemetery. Condolences may be expressed at www.bergmortuary.com.

The family of E. Alan Pinkston created this Life Tributes page to make it easy to share your memories.

Send flowers to the Pinkston family.