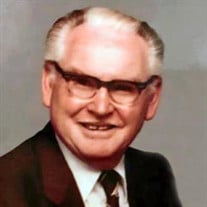 Edgar Thomas Atkin, age 96, peacefully passed away in his sleep, on November 15, 2020, in Orem, Utah. He was the sixth child of 8 born to Willard George and Lydia Ethel Tuttle Atkin. He was born at home, January 4, 1924, in Tooele, Utah. Edgar Thomas (Tom) joined the Army during World War II and was first trained as a radio operator, then taught to lay wire and operate telephones directing the fire of the guns. While serving in France, he was wounded and sent to England to recover. There he met the love of his life, Miss Norma Thomas from Wales. After being together 3 times in person, they corresponded by letter for almost 2 years. That included a proposal and a ring sent through the post. They were reunited when Norma came to the states in October 1946 and were married for Eternity in the Salt Lake Temple on December 11, 1946. They are the parents of eight boys. Tom was schooled and worked as a cabinet maker until he was hired on at Geneva Steel where he worked for over 30 years. He was always busy remodeling their home and was an excellent gardener. He served twice as a Stake Missionary for The Church of Jesus Christ of Latter-day Saints. He also served as a Provo Temple Ordinance worker for 2 years before his Norma passed away in 1997, and then another 17 years after that until 2014. He will be missed by many. He is survived by his 8 sons: Thomas (Marsha) of Chandler, Arizona; Grant (Helen) of Lindon, Utah; Bruce (Vickey) of Victorville, California; Brent (Wendy) of Orem, Utah; Steve (Eleanor) of Winnemucca, Nevada; Norman (JoDee) of Payson, Utah; Byron (Julie) of Mountain View, Wyoming; and John (Ida) of Vernal, Utah. Tom and Norma have 36 grandchildren, 121 great-grandchildren, and 2 great-great-grandchildren…that is 175, for those that are counting. Because of all the restriction and mandates, under the direction of Berg Mortuary there will be a private family graveside service on Wednesday, the 18th. These are trying times, but we wish to stay in compliance to the laws of the land, exactly like Dad would expect us to do. Condolences may be expressed to the family at www.bergmortuary.com.

Edgar Thomas Atkin, age 96, peacefully passed away in his sleep, on November 15, 2020, in Orem, Utah. He was the sixth child of 8 born to Willard George and Lydia Ethel Tuttle Atkin. He was born at home, January 4, 1924, in Tooele, Utah. Edgar... View Obituary & Service Information

The family of Edgar Thomas Atkin created this Life Tributes page to make it easy to share your memories.

Edgar Thomas Atkin, age 96, peacefully passed away in his sleep,...

Send flowers to the Atkin family.