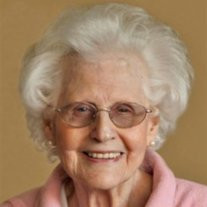 Edith Martha Gunrud Johnson, age 94 of Provo, died Friday, October 4, 2013 in American Fork, Utah. Edith was born on Flag Day, June 14, 1919 in Salt Lake City to Karl and Julia Charlotta Johnson Gunrud. Having two older brothers, Norman and Kenneth, she was the first daughter, and was later followed by two sisters, June and Doris. As a child she helped her family deliver milk that Bossie their cow produced, gather eggs that the hens laid, feed the rabbits, and tend the garden. The family also had a big collie named Tom, who was about her age. With two older brothers she had fun riding in their boat on the canal near their home, swinging in the swing they had made, and hiking in City Creek Canyon. One of her fondest memories was going uptown to Salt Lake City with her father to see Charles A. Lindberg in a parade after he returned from his trans-Atlantic flight. Edith attended Edison Elementary School and Primary in the LDS ward across the street from their home at 360 So. Navajo St. When Edith was in 5th grade, the family moved to Midvale, Utah where her parents leased a bakery. Karl, her father, was an accomplished baker who made luscious cakes, pies, pastries, cookies and bread. Julia managed the bakery and hired the extra help. Eventually Edith was able to work there and assist her mother. Once the Depression hit, the bakery suffered and in 1935 the Gunruds moved back to 360 So. Navajo Street. Edith attended and graduated from West High School. During this time she worked for the New England Bakeries and enjoyed serving people. The first car she purchased was a 1936 Ford for $395. On October 23, 1940, at the age of 21, Edith was baptized a member of The Church of Jesus Christ of Latter-day Saints in the font of the Salt Lake City Tabernacle. While working at the bakery on May 15, 1941 she was introduced to Erland V. Johnson from southern California. Not long after, she and her sister June moved to California so she could continue her relationship with him. On November 15, 1941, they were married in the Mesa Arizona Temple of The Church of Jesus Christ of Latter-day Saints. Edith worked as a typist for Northrop Aircraft Company in Hawthorne, California and Erland set tile by day and worked at Northrop by night. From 1943 to 1960 their seven children were born, Gloria Jean, Vicki, Darlene, Beverly, Vincent, Jacquelyn, and Evonne. With Erland being a tile and general contractor, the family moved ten times to lovely new homes in the southern California area (Inglewood, Palos Verdes, San Pedro, Thousand Oaks). In 1970 they moved to Provo, Utah. Edith was a loving and caring mother. She made sure her children had opportunities to discover their talents and abilities. Each daughter learned to sew and all the children had the opportunity to learn an instrument. She encouraged each to attend college, and five of the seven children graduated from BYU. She was a wonderful housekeeper and cook, always providing delicious and healthy meals for the family. Edith had a flair for decorating, making her homes lovely and comfortable to live in. Edith loved to travel and had the opportunity to see beautiful and interesting places in the United States and world with family and BYU Travel Study. Some of them were: Alaska, Panama Canal Cruise, Mississippi River Cruise, Eastern Mediterranean, Blue Danube Cruise, Canada, Nova Scotia, New England, Oriental Odyssey, Canary Islands, Morocco and Spain, Hawaii, New York and places of interest in Utah. At BYU she took art classes and learned to paint with oils. Several of these paintings grace the walls of her home in Provo. Edith also served in various callings in the Church including Stake Mission Secretary in California, Relief Society, Young Women, and Primary. Her saddest time was when Erland passed away suddenly from a heart attack on January 7, 1992. Edith had a wonderful and full life. Her influence will be felt by her large family for generations to come. She is survived by her seven children, Gloria Forscutt (Richard-deceased), Vicki (Woody) Woolwine, Darlene (David) Barker, Beverly (Robert) Shippen, Vincent, Jacquelyn (Mark) Rowberry, Evonne, 22 grandchildren and 58 great-grandchildren; brother Kenneth (Donna) Gunrud, sister Doris Gunrud Skinner Nessen. Preceded in death by her husband Erland Vincent Johnson, parents, sister June Gunrud Peterson and brother Norman Gunrud. Edith’s family wishes to thank the staff at Bel Aire Sr. Living in American Fork for their kindness, attention, and care. They also wish to express much gratitude to Sherolyn Thomas and Beverly Dow of Alpha Omega Home Health and Hospice for their kind service to Edith during the past years. Also, great thanks to her home teacher, Lee Farnsworth, for his devoted and committed service. Funeral services will be held at 11:00 a.m., Friday, October 11, 2013 at the Edgemont 5th Ward Chapel, 350 East 2950 North, Provo, Utah. Friends may call at the Berg Mortuary of Provo, 185 East Center Street, Thursday evening, October 10, from 6-8:00 p.m. and at the church Friday from 9:30-10:45 a.m. prior to services. Interment will be in East Lawn Memorial Hills, Provo, next to her eternal companion, Erland.

The family of Edith Martha Gunrud Johnson created this Life Tributes page to make it easy to share your memories.