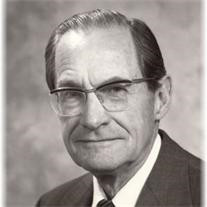 Edwin J. Butterworth, 97, of Provo, prominent journalist, author, teacher and university administrator, died of old age on April 5, 2010. He was the husband of Dorothy Leetham Butterworth. Mr. Butterworth lived a remarkably long and productive life. For nearly 30 years he was director of the Brigham Young University Public Communications Department, heading press relations and the news and public information operations. He also held the rank of assistant professor of journalism and was formerly a newspaper editor. He retired in 1978. Mr. Butterworth was born November 5, 1912 in Salt Lake City, Utah, a son of Edwin Fielding Butterworth and Florence Boud Butterworth. He married Dorothy Ann Leetham on August 26, 1938 in the Salt Lake LDS Temple. They celebrated their 71st wedding anniversary in 2009. Mr. Butterworth was active in the LDS church. He served a mission to Switzerland, Germany, and France from 1933 to 1936. His missionary service demanded particular courage and wisdom because this was the time and place that the Nazis were solidifying their power and they were very distrustful of the Mormon missionaries. Mr. Butterworth was a member of the Salt Lake Tabernacle Choir, served as a bishop's counselor in the Salt Lake 19th Ward, and was a member of the High Council of the BYU Second Stake. He was a contributing author for a lesson manual for priests. Mr. Butterworth was formerly an editor with the Salt Lake Telegram, Salt Lake Tribune, and Deseret News newspapers. The family resided in Salt Lake City until 1949 when they moved to Provo at the time he was appointed to the BYU faculty. He received his bachelor's degree from the University of Utah and earned the first master's degree in journalism awarded at BYU. He taught classes at BYU in news, magazine, and editorial writing; press history; law; newspaper editing; and public relations. As a key individual in promoting BYU as a growing University, he wrote countless newspaper and magazine articles, provided the information for radio, television, and wire services; produced brochures and advertisements, was a speech writer for President Ernest L. Wilkinson, and authored official letters and statements. At BYU he held positions as adviser to the student newspaper, chairman of the publications board, the first editor of BYU Today alumni newspaper, member of the Concerts, History, Better English, and Public Relations Committees and the President's Advisory Council. He was author of the deluxe BYU centennial volume, Brigham Young University: 1000 Views of 100 Years, published a book of President Wilkinson's addresses, Earnestly Yours, and a book of vignettes, I Remember Ernest. President Wilkinson stated: "Edwin Butterworth has contributed as much to the success of my administration as any other person." Mr. Butterworth was elected to the honorary scholastic societies Phi Beta Kappa, Phi Kappa Phi, and Kappa Tau Alpha as well as the professional journalists' society Sigma Delta Chi. He held positions in the American College Public Relations Association, the Association for Education in Journalism, and the Utah Conference on Higher Education. He was public relations chairman of the Provo Chamber of Commerce and historian of the BYU Emeritus Club. In 1994 the club honored him with their prestigious Special Recognition Award. He was listed in Who's Who in the West. Mr. Butterworth was known as a true gentleman and few can match his record for service and dedication. He brightened the lives of all who knew him, with his wise counsel, generosity, encouragement, and good-natured humor. This gracious and giving husband, father, grandfather and friend will be greatly missed. He is survived by a son, Byron E. Butterworth and his wife, Amy Johnson, of Raleigh, North Carolina; a daughter, Bonnie Barnes and her husband Thomas Barnes of Canton, Connecticut; and grandchildren Jeffrey Butterworth, Wendy Butterworth, Kimberly Cote, Chad Butterworth, Kelly Lafferty, Janna Lafferty, and Lindsey Marabella. He was preceded in death by his parents, his brother, Wallace Butterworth, and three sisters, Florence Butterworth Shaw, Ruth Butterworth Latter, and Maxine Alice Butterworth, who died in infancy. Funeral services will be held at 11:00 a.m., Friday, April 9, 2010 at Berg Mortuary of Provo, 185 East Center. Friends may pay their respects at the mortuary, Thursday evening from 6 until 8, and Friday one hour prior to services. Interment will be in the Provo City Cemetery. Condolences may be sent to the family through www.bergmortuary.com or [email protected]

The family of Edwin Butterworth created this Life Tributes page to make it easy to share your memories.

Send flowers to the Butterworth family.