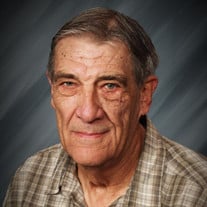 Edwin Earl Wall, 92, of Glen Rose, Texas, passed away peacefully at his home on June 21, 2021. Ted (as he liked to be called) was born the youngest of six children in San Jose, California to Leonard and Lulu Wall on February 20, 1929. He proudly served a two-and-a-half-year mission for The Church of Jesus Christ of Latter-day Saints in Finland. As soon as he returned home, he joined the Unites States Army and served during the Korean War, handling communications while being stationed in Germany. While attending Brigham Young University, he met Joanne Davis, who was literally the girl next door and also the woman of his dreams. They married in the LDS Salt Lake City Temple on February 16, 1956. They had three children of their own and adopted a daughter from Korea. Ted was truly a jack of all trades. He had a knack for fixing anything he found, and learned all he could about maintenance and repair, a skillset that helped throughout his life and allowed him to help and serve many others, which was his joy. He served actively in his church, and never wavered in his faith in God. He was also completely devoted to his wife and children. He shared his love of fixing things, cooking, WWII aircraft, nature, telling stories, and laughter with his family. He was a wonderful listener, always loved without judgment and left a positive impact on everyone he met. Ted is preceded in death by his beloved wife, Joanne LaRue (Davis) Wall, his parents and siblings. He is survived by his four children and their spouses: Kristina and David Brown of Glen Rose, Texas; Steven and Julie Wall of Hyrum, Utah; David Wall and Amber Boehm of Seattle, Washington; and Nicole and Andrew Schwartzberg of Chandler, Arizona; as well as fourteen grandchildren, several great-grandchildren, and his faithful dog Sugar, all of whom he loved dearly. The family would like to extend their gratitude to St. Gabriel’s Hospice of Ft. Worth, Texas for their quick, gentle and compassionate care. Graveside services will be held at 10:00 a.m., Wednesday, June 30, 2021 at the Provo City Cemetery, 610 South State Street, Provo, Utah. Condolences may be expressed to the family at www.bergmortuary.com and at https://everloved.com/life-of/edwin-wall/.

Edwin Earl Wall, 92, of Glen Rose, Texas, passed away peacefully at his home on June 21, 2021. Ted (as he liked to be called) was born the youngest of six children in San Jose, California to Leonard and Lulu Wall on February 20, 1929. He proudly... View Obituary & Service Information

The family of Edwin Earl Wall created this Life Tributes page to make it easy to share your memories.