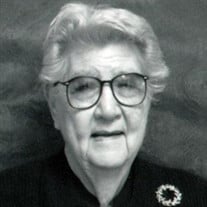 Elaine Dedrickson Dyer died on December 9, 2020, at the age of 97 in Orem, Utah. She was born on November 9, 1923 in Spanish Fork, Utah to Gilbert Dedrickson and Alberta Larsen Dedrickson. Elaine was the second of four children—the only daughter among three sons—Ray, Fred, and Dan. She attended schools in Spanish Fork and following graduation from high school, went to Brigham Young University in preparation for a vocation as a medical doctor. While at BYU, she asked a professor to write her a recommendation to medical school. The professor refused on the basis that “girls do not go to medical school.” Elaine walked out the door never to ask again. She felt the only door open to her was nursing, so she entered the nursing program at St Mary’s of the Wasatch and Holy Cross Hospital in Salt Lake City. She cherished those years because the nuns not only cared about her scholastic achievement, but in a very nice way, allowed her to firm up her own testimony of her LDS beliefs. She graduated in 1945 with her RN, BS and was awarded the Bishop Hunt medal, which qualified her as the valedictorian of her class and the outstanding nurse of the year for 1945. She attained the highest score of anyone from all nursing schools taking the nursing boards in Utah that year. After graduation from nursing school, she began working with the Veterans Administration in the operating room at the VA hospital in Salt Lake City and she continued her service for 28 years. While working full time she enrolled at the University of Utah, and in 1955 received a Master’s degree. In 1966, she attained the position of Chief Nurse—the highest grade allowed for nurses in the Salt Lake Station. In 1967, Elaine became one of the few early nurse graduates to earn a PhD in the state of Utah. An opportunity then opened up to work in research. Over her lifetime, she would develop special research techniques and analysis that allowed her to author three books and nearly fifty peer-reviewed articles published in medical journals. Her research brought her to the attention of the Veteran’s Administration in Washington D.C. She was promoted to be the Chief of Research in Clinical Nursing by the Central Office of Veteran’s Affairs. Her sphere of influence expanded as she continued research on a national level with the goal of improving nursing care in the entire VA system of clinics and hospitals. She was invited to lecture throughout the world and gave hundreds of presentations. In 1978, she received the premier Research Award from the Utah Nurses Association. In 1979, she was invited to assist the BYU College of Nursing and work with faculty members to improve nursing research skills. In 1982, she was made Dean of the College of Nursing at BYU. She was elected to the National Registry of Prominent Americans and to Sigma Xi Honor Society for science. She was also recognized for her work by the World Council for gifted and talented children at their world conference in the Philippines in 1983. She retired from the College of Nursing in 1989. Elaine was a faithful member of her church all of her life and served in many callings. She served on the Young Women’s General Board of The Church of Jesus Christ of Latter-day Saints for 13 years. In her personal life, Elaine married Gordon Westley Dyer in September 21, 1955 in the Salt Lake Temple. One of Elaine and Gordon’s favorite adventures was traveling. They traveled the world together. The also loved their cabin in Bryant’s Fork near Strawberry Reservoir. They spent enjoyable summers in the pines and aspens—fishing in the summer and snowmobiling in the winter. Elaine cherished her time with Gordon. Elaine’s lifetime mission has been to provide love and care to others—most importantly her family, her church, and her country. Elaine was preceded in death by her husband, Gordon, and her three brothers, Ray, Fred and Dan. She is survived by many nieces and nephews who esteem and love her dearly. She has always told them: “You are a blessing to our family; I’m glad we are in the same family.” Family graveside services will be held at 11:00 a.m., Tuesday, December 15, 2020.

Elaine Dedrickson Dyer died on December 9, 2020, at the age of 97 in Orem, Utah. She was born on November 9, 1923 in Spanish Fork, Utah to Gilbert Dedrickson and Alberta Larsen Dedrickson. Elaine was the second of four children&#8212;the only... View Obituary & Service Information

The family of Elaine Dedrickson Dyer created this Life Tributes page to make it easy to share your memories.