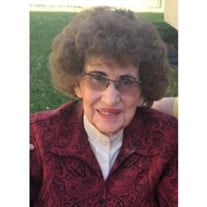 Our sweet mother and grandmother, Elaine Dangerfield Reynolds, passed away peacefully at 95 years of age on May 17, 2022, from natural causes. Elaine was the third and youngest child of Alma Moroni and Mary Beatrice Fowers Dangerfield, born in Provo, Utah, on December 12, 1926. She loved and adored her sister Norma and brother Dean. She lived in Provo and Orem her entire life. She grew up during the depression when every nickel was valued. During high school, Elaine worked at several jobs and carefully saved her money. After high school, she started working for Farmers and Merchants Bank and saved enough money from her earnings to buy her parents a car. Being able to do that for her parents was something that brought her great joy. During this time, she also attended Brigham Young University. One of the skills she acquired was to become an excellent typist. She used those typing skills throughout her life. Elaine was a very active member of The Church of Jesus Christ of Latter-day Saints. She met the love of her life, Rex Reynolds, who was also attending Brigham Young University and was living near campus, in her Church ward. Rex and Elaine were married on August 27, 1951, in the Salt Lake Temple. They were blessed with 5 loving children. Elaine served actively in the Church in many positions, including president of the Primary, Young Women’s, and Relief Society organizations in her ward. She also served a full-time Family History Mission with her husband for six years and then continued to serve in that capacity for several more years after his passing. As a missionary, she started indexing names on FamilySearch.org (indexing is a way to input data from vital records into a searchable format for genealogical use). She continued indexing after her mission and had logged in over 1 million names. Wow! Elaine was a wonderful homemaker and graced her home with delicious breads, cookies, stews, and especially cherry pie. Because she did such stellar work at her previous bank employment, she was asked to help when Orem State Bank was opened. She worked there part-time as an auditor for several years. She was very good at her work. Elaine loved spending time with her family and having them near. Besides caring for her children and grandchildren, she was also the caregiver for her parents in their later years. They both came and lived for a time in her home. She and Rex were very good caregivers. Elaine was predeceased by her husband, parents, siblings, her son Larry Lee Reynolds, son-in-law Michael D. Markham, granddaughter Lucinda Markham, and great-granddaughter Kaiya Hodges. She is survived by four children, Jerry (Karla) Reynolds, Rosemary Markham, Debbie (Bill) Hendrickson, Randy (Cindy) Reynolds, and by daughter-in-law, Jennie Reynolds. Elaine is also survived by 19 grandchildren and 31 great grandchildren. Funeral Services will be held at 11:00 a.m., Tuesday, May 24, 2022, at the Bonneville 10th Ward building, 1498 East 800 South, Provo, Utah. Friends may visit with the family from 9:30 a.m. to 10:50 a.m. prior to the services. Interment will be at the East Lawn Memorial Hills Cemetery, Provo, Utah. Condolences may be expressed to the family at www.bergmortuary.com. A special thanks to Valeo Home Health and Hospice for the loving care they gave to Mom. Join Zoom Meeting LIVE: https://ce21.zoom.us/j/84758271091?pwd=YkFaQmFGaG4xVWxYekUvKzRUc2hNdz09

Our sweet mother and grandmother, Elaine Dangerfield Reynolds, passed away peacefully at 95 years of age on May 17, 2022, from natural causes. Elaine was the third and youngest child of Alma Moroni and Mary Beatrice Fowers Dangerfield, born... View Obituary & Service Information

The family of Elaine Dangerfield Reynolds created this Life Tributes page to make it easy to share your memories.

Send flowers to the Reynolds family.