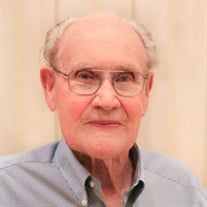 Our beloved father, grandfather, brother, husband, uncle, and friend, Eldon Gale, quietly stepped through the veil May 5, 2014, surrounded by loving family members. At age 93, he had accomplished so much of importance—the kind of critical importance seldom noticed by the world. There are literally hundreds of individuals who are eternally grateful for his patient, caring influence in their lives. Eldon entered mortality June 8, 1920 in Monticello, Utah, the third son of Luther Gale and Irene Merrell Gale, at a time when horses and wagons were the principal form of transportation. He has seen life as it was lived by the original pioneers and as it is lived today with our comforts and ease. Most of Eldon's early life was spent on farms in Monticello and Bluebell, his youth in the Vernal area and the mining town of Rainbow, Utah. Eldon met Reha Myrl Higginson at “Watties” Café on Main Street in Lehi. Eldon was working in the Mercur mine at the time. Not long after, they were married on April 14, 1941 in the Salt Lake Temple. Commitments made at that time governed his life and have influenced his children and grandchildren. Much later, Reha battled cancer for 7 years, eventually succumbing to its effects, August 13, 1991 in San Diego, California where they had lived since 1952. They both faithfully served their family and The Church of Jesus Christ of Latter-day Saints. Eldon served as bishop, in stake leadership positions, as the scout leader in his 70's, and in different leadership roles for two mission presidents. Both also served in the Los Angeles Temple. Ana Maria Gutierrez came into Eldon’s life in 1992, blessing him as a companion for 22 years. They were married in the Jordan River Temple May 23, 1992, and Ana Maria has been at his side constantly since then. He served in the Navy—based in San Diego—during World War II; was worried about and missed terribly by his loved ones in Utah. They were relieved when he was honorably discharged and returned home. Eldon is survived by his wife, Ana Maria: his five children, Larrie Gale, Carol Poulson, Myrl Ann Breinholt, Peggy Kim and Alfredo Cruz; and three siblings, Evaune Winsor, Sterling Gale, and Eveart Gale. Eldon has more than 212 descendants. Funeral services will be held at 11:00 a.m., Saturday, May 10, 2014 at the Grasslands 2nd Ward Chapel, 878 West Center Street, Springville, Utah. Friends may call at the Berg Mortuary of Provo, 185 East Center Street, Friday from 6-8:00 p.m. and at the church Saturday from 9:30-10:45 a.m. prior to services. Interment will be at the Valley View Memorial Park, 4335 West, 4100 South, West Valley City, Utah. Messages, memories and tributes can be posted at: www.bergmortuary.com.

Our beloved father, grandfather, brother, husband, uncle, and friend, Eldon Gale, quietly stepped through the veil May 5, 2014, surrounded by loving family members. At age 93, he had accomplished so much of importance&#8212;the kind of critical... View Obituary & Service Information

The family of Eldon Gale created this Life Tributes page to make it easy to share your memories.

Send flowers to the Gale family.