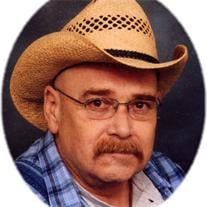 Eldon (Rus) Lee Jones, passed away April 27, 2010 after a courageous battle with cancer. He was 61. Rus was born May 18, 1948 to Jack Lawrence and Martha Frances Flick Jones in Provo, Utah. He married Claire Larsen, December 12, 1969 in Spanish Fork, Utah. She was the “love of his life and best friend” for 40 years. When he married Claire, he inherited her four brothers and two sisters that he loved greatly. He was the proud father of two sons, Jacob and Joshua, both of whom meant everything to him. Rus was “Grandpa” to six of the world’s most gorgeous grandchildren – referring to them as his “flowers in the garden of life”. (Always know he loved each of you dearly.) Eldon lived most of his life and received his education in Orem, Utah. He had a degree in Environmental Science. He was in the United States Army from Feb. 1966 until Feb. 1969 as part of the U.S. Army Engineers Pioneer Unit. He spent two tours in Vietnam. He was proud of his military service. Eldon was a truck driver for Geneva Rock Products in Murray, Utah for many years until a back injury required him to return to school for further education, after which he was employed at South Valley Water Reclamation in West Jordan, Utah. He worked there until becoming disabled. Rus loved life and people with a passion. He was kind and caring to everyone he ever met. Time with family and friends was very important to him. He had great regrets when it became more difficult for him to get out and spend time with people. Rus loved comedy and telling jokes. He had done stand-up comedy and was always ready to entertain people when with a group. He will be remembered for his fun loving ways and ability to make people laugh. He always said, “you can’t take life too seriously”. Rus enjoyed family parties, camping, shooting, collecting knives and jokes, and traveling prior to his illness. Survived by his wife; sons: Jacob (Amy Morison) Jones and Joshua (Amy Wallen) Jones; grandchildren: Kristen, Erika, Benjamin, Kyler, Holland, and Daphnie; the most amazing mother-in-law, Marilyn C. Larsen; his dear “Aunt Thelma” and family in Indiana; brothers and sisters-in-law (that he loved like brothers and sisters): Rand (Norena) Larsen, Greg (Melodie) Larsen, Brad (LeAnn) Larsen, Mark (Loni) Larsen, Gayle Koyle and Kaye (Rik) Hermann; step-brothers: Louis (Diane) Wilkins and Myron (Sandy) Wilkins; many nieces and nephews as well as many close friends. He was preceded in death by his parents; a brother, James Michael; his step-mother, Afton Young; and several dear friends. The family expresses a special thank you to Dr. J. Cordell Bott, Dr. Michael Pearce, Dr. Robert Taylor, Dr. Gary Garner and the incredible nurses and staff at Central Utah Clinic for the wonderful care given to Eldon over the years. He was very grateful for each of you and very appreciative of your kindness and friendship. Rus “We will miss you; you will always be in our hearts. Until we meet again – Love from your family”. Funeral services will be held at 2:00 p.m., Saturday, May 1, 2010 at the Berg Mortuary of Orem, 500 North State Street. A visitation for family and friends will be held prior to the service beginning at 12:30-1:45 p.m. Interment will be at Orem City Cemetery. Condolences may be emailed to [email protected]

Eldon (Rus) Lee Jones, passed away April 27, 2010 after a courageous battle with cancer. He was 61. Rus was born May 18, 1948 to Jack Lawrence and Martha Frances Flick Jones in Provo, Utah. He married Claire Larsen, December 12, 1969 in Spanish... View Obituary & Service Information

The family of Eldon Jones created this Life Tributes page to make it easy to share your memories.