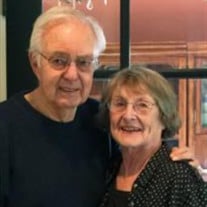 Eldon Clair McKell was born September 29, 1932, at the Crane Maternity Home in Provo, Utah to Eldon Grant McKell and Afton B Vincent. A sister, Linda Kay McKell joined the family in December of 1938. He was a Provo Boy with Friends, Aunts, Uncles and Cousins close. Provo Schools in the shadow of Brigham Young University had him attending BYU from the 8th grade with graduation with a BA degree in Accounting & Finance. That degree took him to California with Bank of America in 1957 until he retired in 1988. He then worked for the Church in their Real Estate Department until 1995. On August 31, 1956, he married Claudia Lee Ord in the Los Angeles LDS Temple, living first in Fullerton, then Yucaipa, then Tustin and finally Riverside. He served as a counselor in the California Riverside Mission and then got called to be the President of the Alabama Birmingham Mission in 1995, where 521 missionaries went through their hearts and hands. He had the blessing of having Claudia as his mission companion. After their mission, they returned to Provo, and lived there until his spirit returned to his Heavenly Home on June 17, 2021. Monica Lee Whitlock, Mark Eldon McKell (Susan), Myles Grant McKell (Sue) and Matthew Daniel McKell (Sherri) joined their eternal family between 1957 and 1966 and now live in Richmond, VA, St. George, St. George, and Orem, Utah. 4 children, 18 grands and 30 great grands are eternally joined. All survive him with his youngest granddaughter serving in the Lisbon Portugal Mission. Eldon Clair loved life in the world of Tennis, Golf, Water Skiing, restoring Classic Cars, BYU, and Family Vacations; all while serving in The Church of Jesus Christ of Latter-day Saints. Missions took him to Virginia Roanoke, Riverside California, Alabama Birmingham, St. George Historic Sites and The Provo MTC. “Called to Serve Him” defined his life. He and Claudia shared the love of the scriptures and of life with work and service to each other and family. Thanking family and friends for love and concern in his last days, with unselfish help from Claudia, Nurse Geof, Nurses Aid Hannah and our sweet neighbor Julianne. Memorial Service scheduled for June 25, 2021 at 11:00am with a Family Meeting with close friends from 9:30 – 10:45am at the Provo Oak Hills Stake Center: 925 East North Temple Drive, Provo 84604. Condolences may be expressed to the family at www.bergmortuary.com. “Till we Meet Again” “Love Forever”

Eldon Clair McKell was born September 29, 1932, at the Crane Maternity Home in Provo, Utah to Eldon Grant McKell and Afton B Vincent. A sister, Linda Kay McKell joined the family in December of 1938. He was a Provo Boy with Friends, Aunts,... View Obituary & Service Information

The family of Eldon Clair McKell created this Life Tributes page to make it easy to share your memories.

Send flowers to the McKell family.