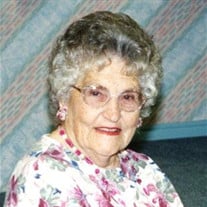 The Life of Elna Emily Conk of Provo, 91 years young, will be celebrated on Saturday, April 4, 2015 at the Kingdom Hall of Jehovah’s Witnesses in Provo, UT beginning at 4:00 p.m. Elna was born April 20, 1923 in Joseph, UT to Rulon and Julia Edwards. She would peacefully fall asleep in death on March 25, 2015. Elna lived life to the fullest. She married Henry Pervine Conk on July 26, 1946. Together, Henry and Elna would spend their time caring for and raising five sons. Her only daughter, Sherry Ruth, would be lost at a very early age due to complications stemming from Polio. While her family was instrumental to the majority of the joys she experienced, it was her love for her Heavenly Father, Jehovah that brought her unending happiness. Baptized as one of Jehovah’s Witnesses on December 5, 1953, she lived the next 61 years faithfully learning, teaching and speaking about the incredible hope of life spoken of in God’s Word the Bible. Focused on her ministry, Elna spent countless hours helping and reaching out to family, friends and complete strangers. Sorely missed will be those enjoyable memories of Elna building her home, playing cards with family and friends or solitaire on her homemade solitaire board, made out of trailer paneling. She loved to camp, hunt, fish and make quilts but it would be amiss to forget about her undeniable love for puzzles, primarily jigsaw puzzles. Elna had a real passion for life and was always quick to share her love for God and those she loved. She is survived by her sons: Ross Conk, Robert (Debbie) Conk, John (Nora) Conk, George (Julie) Conk and Steve (Brenda) Conk; sisters: Evelyn (Arnold) Wheeler and Phyllis Brunty; and brother, Norman (Myrna) Edwards. Additionally, she is leaving behind many grandchildren, great-grandchildren and great-great-grandchildren along with many other family members and friends. Preceding Elna in death are her husband, Henry; daughter, Sherry Ruth Oliver; three brothers and two sisters. Location of Services: Kingdom Hall of Jehovah’s, 491 North 1280 West, Provo, UT 84601. Per her choice, cremation has taken place.

The family of Elna Emily Conk created this Life Tributes page to make it easy to share your memories.

The Life of Elna Emily Conk of Provo, 91 years young, will be...

Send flowers to the Conk family.