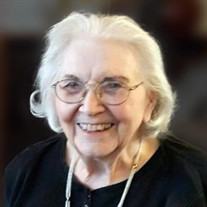 Elsa J. Carver, born December 28,1928 to Elver Johanson and Hilma Frickberg Johanson, passed away during her sleep in Provo, Utah on May 18, 2022. She was born and raised in Salt Lake City, Utah and was a graduate of South High School. She loved music and began singing in choirs starting from junior high. She was proficient in shorthand which helped her be very successful as a secretary at a young age. Elsa bought herself a piano and learned to play so she could accompany herself as she sang. Even though it was uncommon for women in 1953, she served a mission for The Church of Jesus Christ of Latter-day Saints in Stockholm, Sweden for two years working as the mission president’s secretary. She sang in various missionary groups as a way of proselytizing. It was there that she met another missionary, Elder Dale Carver, from Boise, Idaho, who also worked in the mission office as a secretary. After her mission, she returned to Salt Lake City. Elsa and Dale were married on May 31, 1957 in the Salt Lake Temple. Their 65th wedding anniversary is on May 31, 2022. Elsa had two daughters in Rantoul, Illinois while Dale served in the Air Force as a chaplain. After Dale left the military, they moved to New Mexico where Elsa had two more children, a son and a daughter. They raised their four children in Albuquerque, New Mexico. Elsa and Dale then moved to Provo, Utah where they have lived since 1985. Elsa obtained her real estate license in New Mexico where she worked for Pargin Realty. She also worked as a recorder for Utah County which she retired from in 1995. She is survived by their four children, Lorene (Jim) Standring of Crescent City, California; Darsi (Ken) Gibbs of Pocatello, Idaho; Kendell (Veronica) Carver of Beaverton, Oregon; and Caralee (Clay) Crye of Lehi, Utah. She has 24 grandchildren and 24 great-grandchildren. She was preceded in death by her husband, Dale, who died June 20, 2021, and her parents, Joseph Arvid Elver Johanson and Hilma Frickberg. Elsa was the youngest of five children and they preceded her in death: Victor Johanson, Ruth Rasmussen, Lennart Johanson, and Helen Christiansen. Funeral services will be held at 11:00 a.m., Tuesday, May 31, 2022 at the Pleasant View 4th Ward Chapel, 350 East 2950 North, Provo, Utah 84604. Friends may visit with the family from 9:30-10:45 a.m. prior to services. She will be laid to rest immediately following the funeral service at Eastlawn Memorial Hills Cemetery, 4800 North 650 East, Provo, UT, 84601. Condolences may be expressed at www.bergmortuary.com.

Elsa J. Carver, born December 28,1928 to Elver Johanson and Hilma Frickberg Johanson, passed away during her sleep in Provo, Utah on May 18, 2022. She was born and raised in Salt Lake City, Utah and was a graduate of South High School. She loved... View Obituary & Service Information

The family of Elsa Lorene Johanson Carver created this Life Tributes page to make it easy to share your memories.

Send flowers to the Carver family.