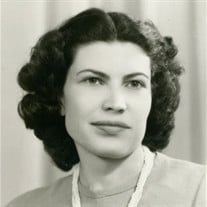 Elsie Dee Adams Florence passed away on Thursday, August 21, 2014. She was born December 23, 1917 in Provo, the oldest of five daughters of Samuel Conrad and Delilah Maria(h) Booth Adams. She attended BYU's Training School, Farrer Junior High School, and graduated from Provo High School in 1935. In 1943, she graduated from BYU and received a Masters Degree in Librarianship in 1954 from the University of Denver. On November 2, 1973 she was married to Henry Samuel Florence of Holladay in the Salt Lake Temple. He passed away September 5, 1986. Elsie Dee was an elementary school teacher who spent many summers working for the Salt Lake County Library System. She opened the South Salt Lake County Library, then opened the Midvale Junior High School Library in 1956. After being the librarian at Hillcrest High School for two years an opportunity came, in 1965, to work for the Utah State Board of Education as a librarian and media specialist. Elsie Dee belonged to several professional, educational and library organizations: American Library, Utah Library and Media Associations, Utah State PTA Board, The Reading Group, The Daughters of Utah Pioneers and Daughters of the American Revolution. Elsie Dee served in The Church of Jesus Christ of Latter-day Saints in several auxiliaries including 22 months in the Canadian Mission, in Toronto, Ontario, Canada, from 1947-1949. Temple work was very important to her. Elsie Dee had a cherished opportunity to serve as a Provo Temple Worker on a regular schedule from 1990 to 2002. As an interested biographer, Elsie compiled 14 histories of different family members. Relevant articles were also published in the Deseret News and Dialogue: A Journal of Mormon Thought Vol VIII. She loved to correspond with many people and was an avid letter writer into her 90's. Helping her husband they kept an "open door" for his large family and her relatives. Their marriage was busy and compatible until his death in 1986. She was thankful for the respect his family gave "Aunt Elsie" and was especially grateful for the care his daughters showed their father in his last illness. Her stepchildren are Margaret Perri, Betty Gladden, Henry Samuel Jr.(Deceased), Giles Sr., Calvin (Deceased), Anne Powell, Beverly Pollei, Maxine Gonzales, Penny Tolman, and foster son Kenneth Ingleby (Deceased). When Henry Jr. and his family moved to Utah, they were very caring and kind to "Aunt Elsie" who had moved to Provo. She appreciated the concern given to her by relatives and their extended families. Elsie Dee had many nieces and nephews who were in and out of her home in Provo, and loved visiting and catching up on the news. Elsie Dee always had a delighted smile when visitors would come and she was a wonderful listener. She had a special talent for making you feel welcome. Elsie Dee had an abiding concern and commitment for family members and the many neighbors who enjoyed her meals and letters. Elsie Dee had a strong testimony of the Gospel of Jesus Christ and it shone in her countenance and was evidenced by her daily deeds. She said she never converted anyone on her mission but she supported many missionaries financially and also through her letters to them. She had a tremendous influence on those around her and will be missed as the Grand Matriarch of our family. She is survived by her three sisters, Florence Adams Reinhardt of Albuquerque, NM, Mary June Adams Hamblin of Provo, Utah and Ruth Adams Iverson of Brigham City, Utah. One sister, Connie Adams Tucker of Provo, is deceased. Also surviving are eighteen nieces and nephews and their extended families. Our heartfelt gratitude to Elsie's amazing and dedicated caretaker of the last six years, Jackie Bautista. Jackie has been up many a night and diligent in her care of Elsie Dee. We will be eternally grateful as a family to Jackie. Funeral services will be held at 11:00 a.m., Friday, August 29, 2014 at the Edgemont 12th Ward Chapel, 350 East 2950 North (Provo Canyon Road), Provo, Utah. Friends may call from 9:30-10:45 a.m. prior to services. Interment, Provo City Cemetery. Condolences may be sent online at www.bergmortuary.com. If you so desire, in lieu of flowers, please contribute to your favorite Charity of choice.

The family of Elsie Delia Adams Florence created this Life Tributes page to make it easy to share your memories.

Send flowers to the Florence family.