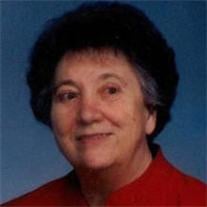 Elva Jean Jones Olsen, 86, of Springville, rejoined her husband, Allan B. Olsen, on Saturday, November 17, 2012. She was born March 13, 1926, in Payson, Utah, the youngest child of James H. and Anna L. Olsen Jones. She graduated from Payson High School and attended Brigham Young University, receiving a two-year Business Technology Certificate. She also took classes at Utah Technical College (now Utah Valley University). She was employed as a secretary/typist, including nearly ten years with Brigham Young University. She married Allan B. Olsen of Mt. Pleasant, Utah, in the Salt Lake Temple, September 29, 1948. They lived in Washington, Wyoming, Arizona, and Utah; their principal residences were in Spanish Fork, Santaquin, Fountain Green, and Provo, Utah. She enjoyed music, dancing, sewing, cooking, and traveling. After suffering a stroke, she lived for the past several years with her son Rex and his family in Springville. She was preceded in death by her husband, who died in 1991; by her parents; by all of her brothers, sisters, and their spouses: Lafayette H. (Esther) Jones, Jennie E. (Joseph) Windle, Maurice E. (Melba) Jones, Zelpha J. (Norvel) Dayton, Norma N. (Wilford) Fischer, J. Darrel Jones, and Tressa A. (Robert) Peterson; and by a nephew and two nieces, John Ronald Jones, Larayne M. Dayton, and Christine J. Probst. She is survived by her five sons: Joseph A. (Cathy) Olsen, of Provo, James B. (Shirley) Olsen, of Orem, Stephen R. (Suzanne) Olsen, of Orem, Rex L. (Margaret) Olsen, of Springville, and Ralph E. Olsen, of Phoenix, Arizona, plus seventeen grandchildren, nine great-grandchildren, and many devoted nieces and nephews. Funeral services will be held Saturday, November 24, 2012, at 11:00 a.m. at the Berg Drawing Room Chapel, 185 E. Center Street, Provo, Utah. Friends may call from 9:30 to 10:45 a.m. prior to the services. Burial will be in the Salem City Cemetery. Condolences may be sent through her obituary at www.bergmortuary.com.

The family of Elva Jones Olsen created this Life Tributes page to make it easy to share your memories.