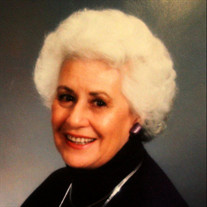 Enid Wayne Mortimore Haslam passed away on April 20th 2018 in Elkridge, Ut. She was born to LeRoy and Isabella Mortimore on March 31, 1919 in Thermopolis, Wyo. She recently turned 99 years old and was starting her 100th year which was very important to her. She grew up in Thermopolis, Wyo., Lander, Wyo., and Yakima, WA. She met Vernon J. Arnoldus in Thermopolis and they were married in 1938. To their union they had four children, Carl (Suzette), Wayne (Carolyn), Lynne (Jack) Trullinger, and Deborah (Blaine) Murri. She married Robert Haslam in 1989. Enid started her career at Geneva Steel. In 1964 she transferred to California and worked for US Steel and her career took off from there. She was the first female in the history of her company to climb the corporate ladder. She had many accomplishments in her life through her work, church and children. She loved golfing, sewing her own clothes, dressing pretty, having her hair look pretty and wearing her pearls. She was an avid reader. She was a member of the Church of Jesus Christ of Latter-day Saints. Enid was preceded in death by her husband, her parents, siblings and her son Carl. A special thanks to the staff of Elkridge Assisted Living and to the staff of the Beehive Homes. The Elkridge staff members loved her dearly and cared for her lovingly right to the end. Thanks to Tender Care Hospice staff for their loving care and respect shown to mother. In lieu of flowers, donations may be made to the American Breast Cancer Society. Funeral services will be held Friday, April 27, 2018 at 11 a.m. at Berg Mortuary, 185 East Center Street, Provo, Utah. Viewings at the mortuary will be held on Thursday, April 26, 2018 from 6-8:00 p.m. and Friday from 10-10:50 a.m. prior to services. Interment, Provo City Cemetery. Condolences may be expressed at www.bergmortuary.com.

Enid Wayne Mortimore Haslam passed away on April 20th 2018 in Elkridge, Ut. She was born to LeRoy and Isabella Mortimore on March 31, 1919 in Thermopolis, Wyo. She recently turned 99 years old and was starting her 100th year which was very... View Obituary & Service Information

The family of Enid Wayne Mortimore Haslam created this Life Tributes page to make it easy to share your memories.

Enid Wayne Mortimore Haslam passed away on April 20th 2018 in...

Send flowers to the Haslam family.