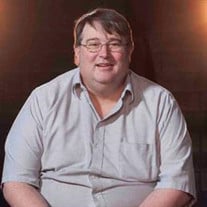 Eric Roy Samuelsen passed away Friday, September 20, 2019, following a long period of hospitalizations battling chronic diseases. Born in Provo in 1956 to Roy and Mary Samuelsen, Eric grew up in Bloomington, Indiana, and developed a lifelong love of basketball, as every good Hoosier does. He graduated in 1974 from Bloomington High School South, where he received his class’ award for Outstanding Senior Male. From 1975 to 1977 he served an LDS mission to Norway, the country of his father’s birth. He received his Bachelor’s degree from BYU, where he met his wife, Annette, in the BYU Oratorio Choir. They were married in the Oakland LDS Temple in 1980. Music would be a major part of their family’s life. He returned to Bloomington, getting a PhD in Theatre History and becoming a scholar of Henrik Ibsen. He would later translate several of Ibsen’s plays from Norwegian. He taught briefly at Indiana University and Wright State University before joining the BYU faculty in 1992. He taught theatre at BYU for many years, working as head of the playwriting department from 1999-2011. He saw many of his plays produced at BYU, and was also a prolific director. When his illness forced him into medical retirement, he found a new artistic home at Plan-B Theatre Company in Salt Lake City, where he became their Playwright in Residence, and later had a season dedicated to his works. He is survived by his wife, Annette; their four children, Kai (Angela) Samuelsen, Rebekah Owens, Tucker Samuelsen, and Lexie (Andrew) Dalton; his brothers, Robert and Rolf, and many beloved nieces and nephews, who remember him for his irreverent sense of humor and love of embarrassing his children. Funeral services will be held at 11:00 a.m., Friday, September 27, 2019 at the Grandview 3rd Ward Chapel, 900 West 2150 North, Provo, Utah. Friends may visit with the family at the Berg Mortuary of Provo, 185 East Center Street, Thursday, September 26 from 6-8 p.m. and at the church Friday from 10-10:50 a.m. prior to services. Interment, Provo City Cemetery. Condolences may be expressed at www.bergmortuary.com. In lieu of flowers, Eric requested that donations be made to Plan-B Theatre Company, his artistic home. You can make a donation in his honor at www.PlanBTheatre.org/Eric.

The family of Eric Roy Samuelsen created this Life Tributes page to make it easy to share your memories.

Send flowers to the Samuelsen family.