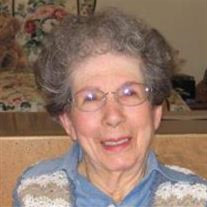 Eris M. Black passed away a few days after celebrating her 94th birthday. She died Sunday August 30, 2015 at the Utah Valley Medical Center of causes incident to age. We are grateful for the kind care from the excellent staff at UVMC and the Hospice providers. Her family also wishes to thank the wonderful caregivers at Courtyard at Jamestown Assisted Living facility in Provo, Utah who loved her while her visits from family couldn’t be as often as we all wanted. We are also deeply grateful for the kindness and loving concern showed to her and her family by the service missionaries of the Church of Jesus Christ of Latter-day Saints, Jamestown Branch. For just over seven-and-a-half years she’s faithfully attended almost all of the meetings they’ve held. Eris is preceded in death by her husband, Leland, and son Stephen. She is survived by her brother, Vern Madsen of Elsinore, Utah. And, by three children, Douglas (Linda Bunnell) of Kennewick, Washington; Bruce (Sharon Jacobsen) of Canton, Michigan; and Marilyn (Rob Ray) of Mansfield, Texas. She is grandmother to 13, great-grandmother to 23, and great-great-grandmother to one. Over the many years she has enjoyed her associations with her aunts and uncles, brothers-in-law, sisters-in-law and many nieces, nephews, and cousins. Mom was the older of two children raised by Leon T. Madsen and Leonora P. Madsen in Elsinore, Utah. She loved gardening, animals, nature, and her friends, and most of all her family. Elsinore, in Sevier County, was the center of her universe until she left home for Dixie College and later BYU. She was raised during the Depression and was acutely aware of the need in those days to save anything and everything that could possibly be of use. Later in life she delighted in being able to discard things she didn’t want just because she could. Leland and Eris were married in the Salt Lake Temple in 1942. From that time on she was focused on the caring and nurturing of her family. She filled her “spare” time magnifying church callings in the Primary, Young Women, and Relief Society and later as a Ward Historian. She and Dad served as temple workers at the Provo Temple and served as full time missionaries in the Texas Houston Mission. As a widow she served as a temple worker in the Timpanogos Temple. She worked as a volunteer Genealogy Specialist at the Harold B. Lee Library at BYU. Genealogy was a consuming activity throughout her life – there are surely many who are grateful for her efforts. She strived to complete a BYU home-study Bachelor’s degree until the late 1980’s. Funeral services will be held at 11:00 a.m., Saturday, September 5, 2015 at the Berg Drawing Room Chapel, 185 East Center Street, Provo, Utah. Friends may call from 9:30-10:50 a.m. prior to services. Interment, Provo City Cemetery. Condolences may be extended to the family at www.bergmortuary.com.

Eris M. Black passed away a few days after celebrating her 94th birthday. She died Sunday August 30, 2015 at the Utah Valley Medical Center of causes incident to age. We are grateful for the kind care from the excellent staff at UVMC and the... View Obituary & Service Information

The family of Eris Madsen Black created this Life Tributes page to make it easy to share your memories.

Eris M. Black passed away a few days after celebrating her 94th...