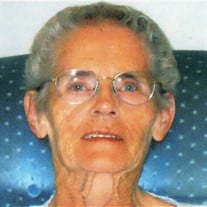 Erma Rich Clark passed away Monday, August 31, 2015, at the age of 85. While she is deeply missed, we are happy that she has now joined other family members and know she has been welcomed with much love and happiness. Erma was born in the old log house on January 27, 1930 in Fairview, Wyoming to Marvin Allred Rich and Leora Child. She is the second of 6 children. Erma attended grade school in Fairview, and graduated from Star Valley High School in Afton, Wyoming. She attended BYU. Erma was raised in a strong LDS home with a strong pioneer heritage. She and her siblings had fun growing up in Star Valley, playing ball in the summer and building big things with the snow in the winter. Her mother ran the post office in their house, and when kids were old enough, they helped. They sold stamps, registered parcels and got them ready for mailing. Her elementary school had 2 grades in each room, with just 4 rooms. They took the bus to Afton, about 5 miles away, when they attended high school. Erma played the trombone in school, and had many friends whom she kept in touch with as much as possible over the years. After high school, Erma met her husband, Lester N. “Brig” Clark while working as a switchboard operator at the Valleon Hotel in Afton. They were married in Provo, Utah on July 4, 1950. She liked to joke saying she gave up her independence on Independence Day and never got it back again. They lived in Provo for many years and later moved to Payson and built a home there. Erma was truly a hard worker, caring for her family, and working outside the home. She worked at Signetics in Orem, Utah, for more than 20 years. When the plant closed down, she worked as a crossing guard in Payson, and later cleaned rooms at the high school in the afternoons after she finished crossings. She was a crossing guard for 15 years. She was 80 when she finally retired. It was not unusual for her to come home from working a long hard day, and proceed to do canning of all kinds; fruits, vegetables, even fish. Not to mention making dinner and caring for her 5 kids. She was blessed to spend the last 2 ½ years at Mountain Air Assisted Living in Payson, where she was cared for and loved by their excellent staff. While it was difficult for her at first, it truly became her ‘home’ and she referred to it as such. Many thanks to the wonderful people at Mountain Air. Erma has always placed her children first. We all went to church and she taught us about family, the church, and how to pray. She was a woman of great faith, and courage, and instilled that in her children. She is deeply loved by all, and will truly be missed. Erma and Brig had 5 children, Loreta Ann, Roger Niel (Linda), James Marvin (Heidi), Roslyn Kirsten (Brent), and Lester David. Her son, Jim, lived in Oregon and died at age 49 of cancer. Surely they have had a wonderful reunion. She has 12 grandchildren, and 15 great-grandchildren whom she loved and loved spending time with. Funeral services will be held at 11:00 a.m., Tuesday, September 8, 2015 at the Mountain View 7th Ward Chapel, 681 East 500 North, Payson, Utah. There will be a viewing that morning from 9:30-10:45 a.m. prior to services. Interment at Payson City Cemetery. Friends and family are all welcome to join with us as we say goodbye to this wonderful daughter of God. Funeral arrangements for Erma are being handled by Berg Mortuary of Provo. Our thanks to them also. Condolences may be extended to the family at www.bergmortuary.com.

Erma Rich Clark passed away Monday, August 31, 2015, at the age of 85. While she is deeply missed, we are happy that she has now joined other family members and know she has been welcomed with much love and happiness. Erma was born in the... View Obituary & Service Information

The family of Erma Rich Clark created this Life Tributes page to make it easy to share your memories.