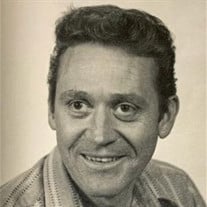 Ernest “Ernie” William Lichfield (89) passed peacefully on January 6, 2020, surrounded by family. He was born August 3, 1930 to William Glen and Beulah Menlove Lichfield. He was born at the Crane Maternity Home in Provo Utah. Always good-natured, a bit mischievous, and more than a bit inventive, Ernie often gently teased those around him. As a boy, he rigged the family home’s doorbell to the seat of his father’s favorite chair. When Will sat, the doorbell would immediately ring. After getting up to open the door…twice, Will moved to another chair. As a child, Ernie was given an old broken pin ball machine. After repairing it, Ernie charged his dad a nickel to play. Those nickels became Ernie’s allowance money. Ernie attended Brigham Young primary and secondary schools. He served a 30-month mission for The Church of Jesus Christ of Latter-day Saints in Norway. After sailing home on the RMS Queen Mary, Ernie experienced his first airline flight from NY to SLC. Ernie met and married his sweetheart, Oneta Bunnell at BYU. They wed in 1954. They doted on their four daughters. Instilling empowerment, he told them they could achieve anything they put their minds to. His girls were as good, if not better, than any boy. Ernie graduated in the second electrical engineering class from BYU and Air Force ROTC in 1956, as 2nd Lieutenant. He minored in Norwegian. The Air Force sent Ernie to Penn State University; he completed a meteorology degree in 1958. Ernie spent his career with the National Center for Atmospheric Research (NCAR) in Boulder, Colorado. Integral to the GHOST balloon project, Ernie designed electrical equipment attached to weather balloons which collected data, circumnavigating the upper atmosphere. He was instrumental in detecting the El Nino effect. Ernie traveled the world for his NCAR assignments: Japan, the South Pacific, and Antarctica. Cold War tensions necessitated weather balloons launched in the southern hemisphere; an office was set up in Christchurch, New Zealand, where Ernie and his family lived three separate times. After retiring from NCAR, Ernie and Oneta lived in Albuquerque, New Mexico for several years, and then returned to Utah County. Ernie could often be found flying his model airplanes in the field near his Provo home or squirting unsuspecting people with water cannons on his RC boat at Bridal Veil Falls. In 1993, Ernie and Oneta built a home in Springville, where they lived for 25 years. In 2018, they moved to Cove Point retirement community. Ernie is preceded in death by his parents, sisters and brothers-in-law, Elaine (Royal) Henderson and Afton (Aldo) Nelson. He is survived by his wife of 66 years; daughters, Becky (Steve) Himle of California, Cynthia (Don) McConkey of Colorado, Kathleen (Rod) Tarullo of Colorado, and Jennifer (Jerry) Horton of Virginia; fifteen grandchildren and 27 great-grandchildren. Funeral services will be held at 1:00 p.m., Saturday, January 11, 2020 at the Hobble Creek 5th Ward Chapel, 1460 East 900 South, Springville, Utah. Friends may visit with the family from 11:30-12:45 p.m. prior to services. Interment, Provo City Cemetery. Condolences may be expressed at www.bergmortuary.com.

The family of Ernest "Ernie" William Lichfield created this Life Tributes page to make it easy to share your memories.

Send flowers to the Lichfield family.