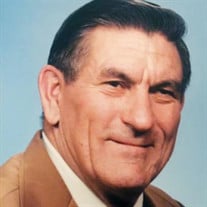 Ervin Clair Davis passed away December 12, 2016 in Provo, Utah at the age of 91. He was born on June 22, 1925 in Salem, Utah to William Lars Davis and Harriet Coombs. Ervin grew up in Salem, attending schools in Salem and Spanish Fork. Ervin met his angel, Helen Patten, at a Payson City Band Concert. They were married on July 2, 1945. At the time, Ervin was serving his country at the military hospital in Redwood City, California during WWII. Ervin served in the U.S. Army Military Police Corps. During this time Ervin developed a love for playing softball and baseball. After his honorable discharge, Ervin and Helen settled in Payson, Utah where their oldest daughter Lynnette was born. After a few years in Payson the small family moved to Provo, Utah where their other 3 children were born. At this time he attended BYU and the Utah Trade Technical School (UVU) where he learned the trade of a finish carpenter working in the construction industry. In 1963 Ervin took his family to the Manti Temple where they were sealed as a forever family. Ervin and Helen were married for 70 years. Ervin became one of the Lord’s faithful servants in the LDS church serving as the Young Men’s Stake Athletic Director, a counselor in the Sunday School, a counselor in the Ward Bishopric and was always a diligent Home Teacher. Ervin is survived by his children Barbara Cannon, Ronald Ervin (Shana), Craig Ryan (Michelle), and son-in-law John Howe and numerous grandchildren and great grandchildren. He was preceded in death by his wife, Helen Patten and daughter Lynette Howe as well as 2 sisters: Donna Nuttall and Lula Garrett, and 2 brothers Everett and Claude. Funeral services will be held at 11:00 a.m., Thursday, December 15, 2016 at the Berg Mortuary Drawing Room Chapel, 185 East Center Street, Provo, Utah. Friends may call at the mortuary prior to the services at 10:00am –10:45am. Burial will be in the East Lawn Memorial Cemetery in Provo, Utah following services. Condolences may be expressed at www.bergmortuary.com.

Ervin Clair Davis passed away December 12, 2016 in Provo, Utah at the age of 91. He was born on June 22, 1925 in Salem, Utah to William Lars Davis and Harriet Coombs. Ervin grew up in Salem, attending schools in Salem and Spanish Fork. Ervin... View Obituary & Service Information

The family of Ervin Clair Davis created this Life Tributes page to make it easy to share your memories.