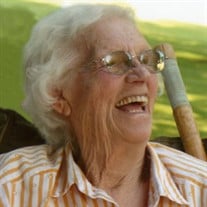 There was great rejoicing in heaven on July 2, 2014 as Ethel was reunited into the arms of her Heavenly Father, husband, sons, parents, family and friends. Ethel was born in Indiana on Aug 10, 1924 to Forest and Rose Alt Judy. She was the youngest of 5 children. She married David Grimes in Freemont, Ohio on May 10, 1957. They had 3 children: Tammy, Jerry and Joe. She had an aptitude for doing things generally associated with a man's work yet had the skills of a woman as well. At only 18, she was recognized in her local newspaper for her skills as a milling machine operator and setting up machines for other operators. She was mechanically inclined. She also drove the backhoe and dump truck for her and her husband's business, D & E Construction. Her husband died in 1967 leaving her to raise their 3 children, which she did beautifully. About 1972 she moved to Orem, Utah. She was an active member of The Church of Jesus Christ of Latter-day Saints. She loved cub scouts, her service as “Judge Judy” will long be remembered. Few people were able to win her in a game of checkers, ping pong or croquet. She loved her family, knew how to be a good friend, and was strong, resourceful and full of spunk. She enjoyed cooking, motorcycles, rock collecting and gardening. The last years of her life she was cared for in the loving home of her granddaughter, Sandy (Brian) Lakes and great-grandchildren: Steven, Sanbrie and Sahalie. The last months of her life she enjoyed lunch 6 days a week at Chuck-A Rama with as many as 3 root beer floats at a meal. She is survived by her only daughter, Tammy (Steve) Hardy; 15 grandchildren and 22 great-grandchildren. She was preceded in death by her husband; 2 sons, Paul Joseph David (Laura Harding) Grimes and Jerry David (Pamela Kenney) Grimes; 4 siblings, Cleatus (Mable Nischwitz), Marie (Ralph Landers), Floyd (who died at 2 years old) and Basil (Zelma Spencer). Our many thanks to all of her loving family, Holly, and the wonderful nurses who took such good care of grandma. Funeral services will be held at 11:00 a.m., Tuesday, July 8, 2014 at the Slate Canyon 8th Ward Chapel, 1625 South Slate Canyon Drive, Provo, Utah. Friends may call at the church Monday, July 7, from 6-8:00 p.m. and Tuesday from 10-10:30 a.m. prior to services. Interment will be in the Provo City Cemetery. Condolences may be sent online at www.bergmortuary.com.

There was great rejoicing in heaven on July 2, 2014 as Ethel was reunited into the arms of her Heavenly Father, husband, sons, parents, family and friends. Ethel was born in Indiana on Aug 10, 1924 to Forest and Rose Alt Judy. She was the youngest... View Obituary & Service Information

The family of Ethel Judy Grimes created this Life Tributes page to make it easy to share your memories.

Send flowers to the Grimes family.