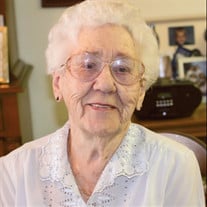 Ethel Marie Belmont Tregeagle, age 107, passed away peacefully on March 2, 2019 in Orem, Utah. Ethel was born on January 5, 1912 in Provo, Utah, to Sidney Henry Belmont, Sr. and Mary Emelia Blumenthal Belmont. She was taught responsibility, self-discipline and independence at a young age. She had many fond memories of family and friends and found great joy in telling stories of her family and of her heritage. Ethel often referred to herself as an “Old Landmark of Provo.” She graduated from Provo High School in 1930 and met the love of her life, Linden Sherwood “Trig” Tregeagle. On February 11, 1931, they were sealed in the Salt Lake Temple after a wonderful two year courtship. Together they raised three children and enjoyed 55 happy years together. Ethel led an active life and was an accomplished artist and painter. She received many awards for her artwork and was a proud member of The Women’s Council of Provo for many years. She served as Council President between 1974 – 1976. She could always be found participating in and organizing art shows, fundraisers and rummage sales. Her greatest joy was her family and being a caregiver to others. In her later years she remained active through helping family, friends and others in need, making phone calls and sending thoughtful cards to those she loved. Ethel summed up her life often saying, “I’ve had a good life and that is about as much as someone could hope for.” Ethel is survived by her sons, Lynn Richard Tregeagle and Thomas Edwin Tregeagle; 11 grandchildren, 40+ great-grandchildren, and 12+ great-great-grandchildren. She is preceded in death by her husband, Linden Sherwood Tregeagle, her parents, a brother, Sidney H. Belmont, Jr., daughter-in-law Beverly Tregeagle, daughter and son-in-law Mary Ellen Dunn and Vern Dunn, son, James Edward Tregeagle, daughter-in-law Carole Tregeagle, 2 grandsons and 1 great-grandson. Graveside services will be held on Wednesday, March 6, 2019 at 2:00 p.m. in the Provo City Cemetery, 610 South State Street, Provo, Utah. Family and friends are invited to meet at the cemetery. Should the weather be inclement, services will be moved inside to the Berg Drawing Room Chapel, 185 East Center Street, Provo at 2:00 p.m. To send thoughts, memories or condolences to the family, please go to www.bergmortuary.com.

The family of Ethel Marie Belmont Tregeagle created this Life Tributes page to make it easy to share your memories.

Send flowers to the Tregeagle family.