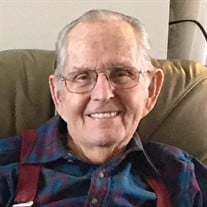 Just a short 24 hours after a special tribute with a classic car parade, we lost a great man, Eugene Ridge Lassen on July 8, 2020 after a short battle with lung cancer. He was a loyal husband, father, grandfather, brother and friend. Gene was... View Obituary & Service Information

The family of Eugene "Gene" Ridge Lassen created this Life Tributes page to make it easy to share your memories.

Just a short 24 hours after a special tribute with a classic...

Send flowers to the Lassen family.