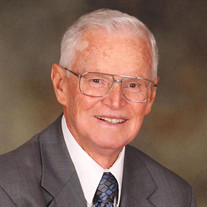 Evan Smith Stewart, 82, passed away peacefully surrounded by his family on Friday, July 3, 2020, after a valiant battle with cancer. He was born August 6, 1937, in Provo, Utah to Alma Evan and Leah Deane Smith Stewart and was the oldest of seven children. Evan attended Union Elementary in Vineyard and also Lincoln Junior High and High School in Orem. Upon graduation from high school in 1955, he attended Brigham Young University, where he earned an associate degree. On June 25, 1957, Evan married Valene Holdaway in the Salt Lake Temple. He was an active member of The Church of Jesus Christ of Latter-day Saints, serving in many ward and stake capacities, including Bishop’s Counselor and Elders Quorum President. He and Valene also served a mission at the Lindon Cannery. In 1962, Evan started working at Hercules Aerospace as a technician in the Research and Development Division. He also worked as a supervisor in that division for the last ten years before retiring in 1997. Evan enjoyed time with his family, fishing, hunting, and riding his four-wheeler. He also enjoyed playing golf in league play after work at Hercules and with his many friends at Cascade Golf Course, where he worked part-time after he retired. Evan is survived by his wife, Valene; their six children—Vicki Parker (Lindsay), Shyrlene Brooks (Chris), Janice Prete (Warren), Sheri Gappmayer (Roy), Mark (Melanie) and Michael (Christina); 23 grandchildren; 23 great-grandchildren; and three siblings—Paul Stewart, Keith Stewart and Kathy Larsen. He was preceded in death by his parents, a brother (Kent), two sisters (Julie and Nedra) and two grandsons (Kade and Connor Gappmayer). Private funeral services (due to COVID-19) will be held on Friday, July 10, 2020 at 11:00 a.m. in the Lakeview 7th Ward Chapel, 155 West 1600 South, Orem, Utah. Interment will be at the Orem City Cemetery. Condolences may be expressed at www.bergmortuary.com.

Evan Smith Stewart, 82, passed away peacefully surrounded by his family on Friday, July 3, 2020, after a valiant battle with cancer. He was born August 6, 1937, in Provo, Utah to Alma Evan and Leah Deane Smith Stewart and was the oldest of seven... View Obituary & Service Information

The family of Evan Smith Stewart created this Life Tributes page to make it easy to share your memories.

Send flowers to the Stewart family.