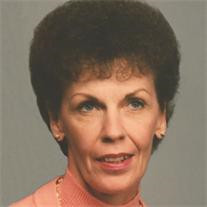 Evva Jean Wolfenbarger Stubbs, loving mother and grandmother, passed away June 6, 2012. She was born on February 5, 1938 in American Falls, Idaho to Floyd and Afton Wolfenbarger. Evva was the oldest of seven children. In her youth, Evva sang in various choirs with her aunt and best friend, Betsy Christensen Nichol. She came from a very athletic family and enjoyed playing basketball. Evva graduated from American Falls High School in 1956. She later move to Provo, Utah where she met and married Jerry Stubbs. Evva and Jerry very much enjoyed raising their four children: Kyle (Tauna) Walrath, Keri (Bill) Cheney, Konni (John) Wattleworth, and Jeremy Stubbs. As an adult, Evva enjoyed bowling, golfing, crocheting, and reading. She could often be found sitting at the kitchen table doing a crossword puzzle. Evva devoted her whole life to loving and serving her family. She was a second mother to her siblings and helped to raise many of her grandchildren. She will always be loved and forever missed by her family and friends. She is survived by her husband, three brothers, a sister, all four of her children, twenty grandchildren, and twenty-seven great-grandchildren. She was preceded in death by her parents, two brothers, and a great-grandson. The family would like to thank Becky Nielson, Krissy Davis, Linda Rodier and the rest of the wonderful staff at A-Plus Hospice for all their compassionate service. They also wish to express gratitude and appreciation for all the love and kindness shown by Evva's friends and neighbors. Graveside services will be held at 11:00 a.m., Monday, June 11, 2012 at the Provo City Cemetery, 610 South State Street. Friends may call at the cemetery from 10-11:00 a.m. prior to services. Condolences may be sent through her obituary at www.bergmortuary.com. In lieu of flowers, the family kindly requests that donations be made to the Evva Stubbs Memorial Fund at Key Bank.

Evva Jean Wolfenbarger Stubbs, loving mother and grandmother, passed away June 6, 2012. She was born on February 5, 1938 in American Falls, Idaho to Floyd and Afton Wolfenbarger. Evva was the oldest of seven children. In her youth, Evva sang... View Obituary & Service Information

The family of Evva Wolfenbarger Stubbs created this Life Tributes page to make it easy to share your memories.