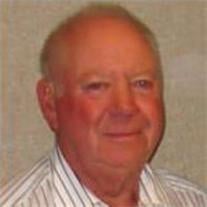 Our dear husband, father, grandfather, and friend, Farrell Sheldon Hirst, age 80, of Payson, Utah, passed away suddenly on November 13, 2012. He was born April 3, 1932 to Fredrick Sheldon and Alberta (Allen) Hirst, in Provo, Utah. He graduated from Provo High School, class of 1950, and served in the United States Navy during the Korean Conflict. He married Phyllis Lind Bean on August 23, 1955 in the Idaho Falls LDS Temple. He retired from Geneva Steel and began a great adventure working at various campgrounds in California and Utah, until moving to Dutch John, Utah, where they contracted and worked for the US Forrest Service at Flaming Gorge Reservoir for 22 years, before retiring to Mt. Pleasant, Utah. Fly fishing was his passion, but he also enjoyed many other outdoor activities. He loved his family and enjoyed spending time with his children, grandchildren, and great-grandchildren, and they loved spending time with him. Farrell is survived by his wife, Phyllis (Bean), and children: Farrell Duane and Christina (Nielsen) Hirst, Dale Lloyd and Tiffany (Cropper) Hirst, Camelle Hirst, Stephanie Hirst, and Gregory Sheldon and Alison (Vincent) Hirst. He has 11 grandchildren and 7 great-grandchildren. He is also survived by his sister Barbara (Hirst) and Harry Payne. He was preceded in death by his parents, and brother, Neil Hirst. He made friends wherever he went and was loved by all who met him. Funeral services will be held at 11:00 a.m., Saturday, November 17, 2012 at the Berg Drawing Room Chapel, 185 East Center Street, Provo, Utah. Friends may call from 9:30-10:50 a.m. prior to services. Cremation will follow the service. Condolences may be sent from his obituary at www.bergmortuary.com.

The family of Farrell Hirst created this Life Tributes page to make it easy to share your memories.

Send flowers to the Hirst family.