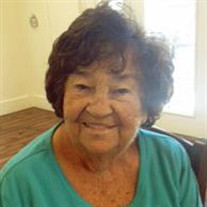 Fay Hair Miller of Provo, Utah passed away July 20, 2015 at the age of 87 (the day of her 69th wedding anniversary). She was born on June 20, 1928 to Berlyn Moroni and Moneita Haycock Hair. Fay married Milton DeLos Miller on July 20, 1946. Their marriage was later solemnized in the Salt Lake Temple, June 5, 1968. Together they had five children. She was a secretary at the Utah State Hospital for many years, retiring in 1987. Her hobbies and interests included boating, water skiing, water crafting, writing poems and tributes for her family, and countless hours of quilting to give to friends and family. She was a room mother in PTA during children’s schooling and active in the LDS Church in many capacities including Young Women, Primary, Library and greeting at the door of the chapel each Sunday. She spent many hours providing Humanitarian Service, sewing receiving blankets for newborn baby kits. Her greatest love was her family. She supported them in all their activities and there was little that could keep her away from the ballpark. Fay is survived by her children, Linda Marie Parkinson, Vicki Ileen (Tom) Haws, Kevin Robert (Karlyn) Miller and Tonya (Brad) Smith; 15 grandchildren; 39 great-grandchildren; 1 great-great-grandchild plus 1 great-great-grandchild arriving in 2015. She was preceded in death by her husband; son, Randy Wayne Miller; parents; brother, Max Hair and great-grandchildren, RJ Lourenco and Braxton Craig Miller. The family would like to express their gratitude for the care given to Fay by the staff of Our House Assisted Living. Funeral services will be held at 11:00 a.m., Thursday, July 23, 2015 at the Sunset Stake Center Chapel, 1560 South 1100 West, Provo, Utah. Friends may call from 9:30-10:45 a.m. prior to services. Interment will be in the Provo City Cemetery. Condolences may be extended to the family at www.bergmortuary.com.

The family of Fay Hair Miller created this Life Tributes page to make it easy to share your memories.