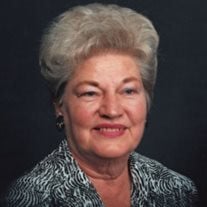 Faye Margaret Christensen Barrett, 89, passed away March 7, 2014, at UVRMC in Provo, Utah. Born June 5, 1924, in Provo to Hans C and Emma Fisher Christensen, she was raised during the depression and learned early in life the value of hard work. She graduated from Provo High School in 1942, before attending LDS Business College in SLC. On June 29, 1946, she married Robert (Bob) Frank Barrett after he returned from fighting in WWII. They were later sealed in the Mt. Timpanogos Temple on July 13, 2004. During the war she worked as a secretary at Geneva Steel to help support the war effort. Bob and Faye made their home in Provo where they lived the rest of their lives. She was an active member of the LDS Church, where she served in the Primary Presidency from 1955 to 1960. She was a devoted wife and mother to her husband and four children. During their early lives, the family loved to spend time traveling, fishing, hunting and a yearly summer vacation to see her sister in California. She was born of pioneer stock and worked hard into her 80’s. Meals were always prepared for the family each day at meal time. She used an old manual washing machine with three large tubs and rollers, before hanging the damp clothes on the clothes-line to dry. She believed that the manual wash and sunshine were much superior to an automatic washing machine, so she went to the extra work to do the wash manually. This was an example of her work ethic and devotion to her family’s needs. She was always on task and lived by an inner determination to faithfully fulfill her matriarchal responsibilities. She had a quiet demeanor, but a great source of strength of character which she conveyed to her children. We love her so much; we will miss her; and will remember her with the fondest of memories. She returned home when her work was completed here on earth. Faye is survived by her three sons: Brent, Bruce (Betty) and Brad Barrett, all of Provo; 9 grandchildren and 24 great-grandchildren. She was preceded in death by her husband, Bob; daughter, Diane; parents; brother, Vivian Christensen; and sister, Deon Shipp. Funeral services will be held at 11:00 a.m., Thursday, March 13, 2014 at the Lakeside 6th Ward Chapel, 102 North 2400 West, Provo, Utah. Friends may call at the Berg Mortuary of Provo, 185 East Center Street, Wednesday, March 12 from 6-8:00 p.m. and at the church Thursday from 10-10:45 a.m. prior to services. Interment will be in the Provo City Cemetery. Condolences may be sent online at www.bergmortuary.com.

Faye Margaret Christensen Barrett, 89, passed away March 7, 2014, at UVRMC in Provo, Utah. Born June 5, 1924, in Provo to Hans C and Emma Fisher Christensen, she was raised during the depression and learned early in life the value of hard work.... View Obituary & Service Information

The family of Faye Margaret Christensen Barrett created this Life Tributes page to make it easy to share your memories.

Send flowers to the Barrett family.